Ukraine has “biological research facilities,” says Undersecretary of State Victoria Nuland, when asked by Sen Rubio if Ukraine has biological or chemical weapons, and says she’s worried Russia may get them. But she says she’s 100% sure if there’s a biological attack, it’s Russia.

Ukraine has “biological research facilities,” says Undersecretary of State Victoria Nuland, when asked by Sen Rubio if Ukraine has biological or chemical weapons, and says she’s worried Russia may get them. But she says she’s 100% sure if there’s a biological attack, it’s Russia. pic.twitter.com/uo3dHDMfAS

U.S. Under Secretary of State Victoria Nuland says Washington is working with Ukraine to prevent biological research facilities from falling into Russian hands. She just confirmed every conspiracy theory about the existence of those labs.

U.S. Under Secretary of State Victoria Nuland says Washington is working with Ukraine to prevent biological research facilities from falling into Russian hands. She just confirmed every conspiracy theory about the existence of those labs. pic.twitter.com/ynkd7hW6iK

Here’s a map of their approximate locations in Ukraine: 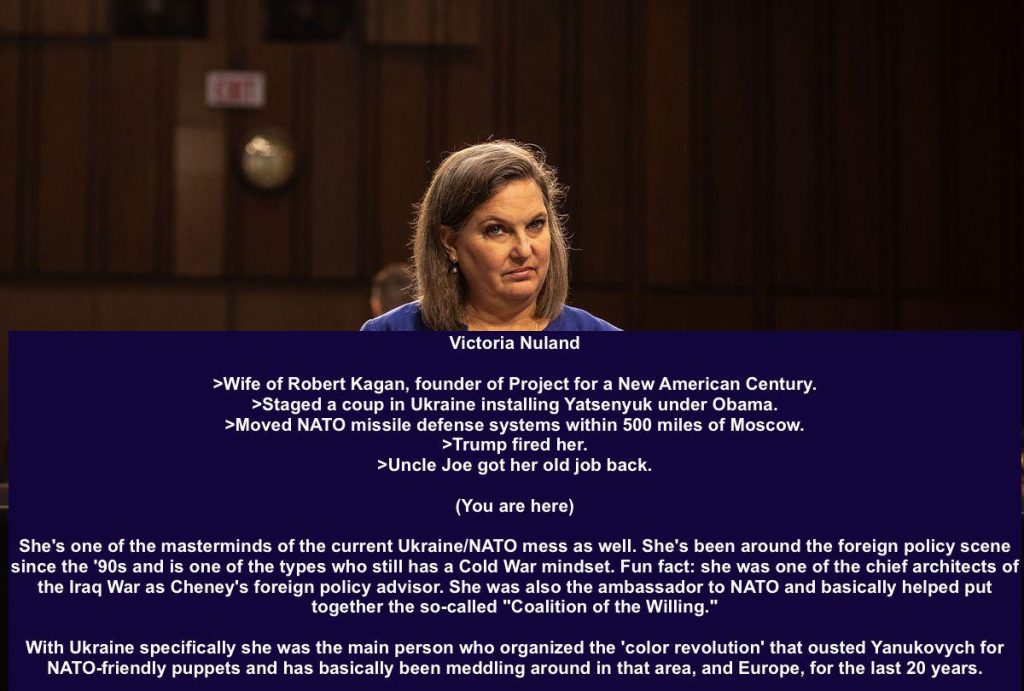 Secretary Nuland’s tiptoeing with her words here. She looks scared as hell that she’s gonna say the wrong thing. Here’s what she really means.

The US media complex over the past 2 weeks #USBiolabs pic.twitter.com/U5eut8TcZC

BUT WHY IS SHE ACTUALLY SCARED ABOUT?

Article 8 of The Rome Statute of The International Criminal Court (ICC) defines biological experiments as war crimes. The US, however, is not a state party to the international treaty, and cannot be held accountable for its war crimes. AND STILL SO NERVOUS?

But what are bioweapons?

Basically they’re weaponized versions of dangerous diseases, used to quickly kill a lot of people. Examples include: ricin, anthrax, and smallpox. Yes, that ricin. The undetectable poison you saw in Breaking Bad. In 1980, the WHO had officially eradicated smallpox through years of vaccines.

They allowed to show us this “top secret” laboratory. Imagine what they wont show us…

Wait a minute… isn’t Bill Gates releasing a new book about how to prevent the next pandemic? In 2021, he warned that bioterrorism could be worse than naturally occurring epidemics. He warned of smallpox terror attacks in particular.

Do you understand what this means?

Ukraine is now one of 18 countries in the world who have or are suspected of having bioweapons programs. This war’s stakes just got a lot higher.

I remember wondering why Russia would invade Ukraine… I understood that Putin was threatened by NATO and the west. But there seemed to be a key detail missing.

This could be it! Putin probably knew about the bioweapons in Ukraine and was waiting for an opportunity to destroy these weapons or take them for himself.

So if this was a fundamental reason why Putin moved forward… why wouldn’t he address this?

Putin spoke more about NATO expansion, which is his overarching objection and rationale for invasion. Moreover, new Intel documents show that Russia PROTECTED Donbass from a PLANNED Kiev attack and genocide…

He has objected to US bio labs in Ukraine in the past, but Western media called it Russian disinformation.

Putin aired out a laundry list of grievances and Western military intervention. One example was the US lie of WMD’s in Iraq as a pretext for invasion.

Perhaps he didn’t mention bio labs in Ukraine as a pretext for this invasion so he wouldn’t box himself in like GW Bush did with Iraq.

America: Our biolabs in Ukraine are purely defensive. Nothing to see here folks. 😙… Also America: GOD FORBID RUSSIA CAPTURE THEM. 🤬

As already introduced in prior posts:

What if this war is a false flag to release the new epidemic? That would be torally crazy, no? [Reddit]