A number of commentators have recently posted articles on significant falls around the world in reported live births during the first months of 2022. Some have already been compiled in my previous article here. You will find some more below:

This is a massive safety signal for infertility. Germany’s FIRST report of birth rates since the rollout.

Remember that the birth rate data is 9 months too late.

If the next quarter is worse, this is Children of Men scenario. pic.twitter.com/AwhvB6KjpG

Birth rates are also decreasing in the Netherlands’… 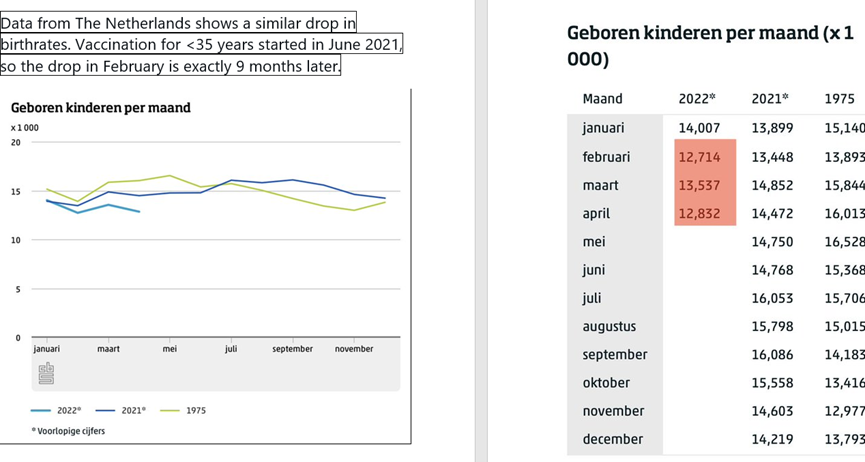 “Birth Gauge” has stats for a number of countries.

New birth table. Apart from more red and negative developments thus far in 2022, I have added a new table for countries that don’t publish monthly/quarterly data, but some subnational regions do, allowing for an estimate to be done. pic.twitter.com/C57Zmjgnxg

Sweden. Q1 live births. On the right I zoom in on the Y axis. Shown, is the % change from the 2015-19 average.https://t.co/oXXPLWPWh7 pic.twitter.com/PAZpgCpMTI

As these roughly correspond to a time nine months after the Covid vaccine rollout began in earnest for the childbearing-age portion of the population, I looked at U.K. data to see if I could find anything similar.

ONS does not report live births on a weekly basis as it does for deaths. Furthermore, it only releases provisional figures on an annual basis some months into the subsequent year.

However, Northern Ireland is much more up-to-date and reports current live births on a monthly basis, the most recent months by month of registration and earlier months by month of birth – the statistics authority says that 98% are correctly assigned to months of birth within 42 days of the birth.

Using these data, I calculated the average monthly live births in each month over the past six years (2016-2021) and compared this to the data from 2022. January to March 2022 is by month of birth, whilst April and May 2022 are still by month of registration only, which usually is an overcount compared to month of birth. The chart currently looks like this: 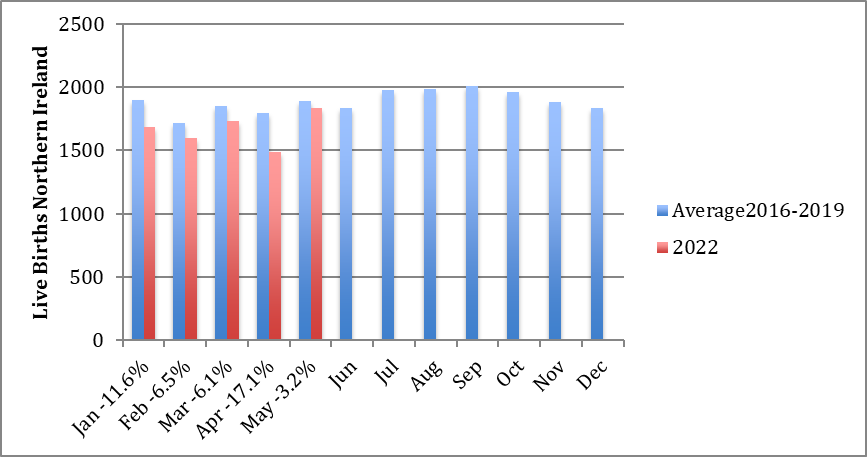 Over the first five months of 2022 the total number of live births is 8.9% lower than the average for 2016-2021. There is a particularly large fall in April, which may be significantly corrected when the April figures for month of birth become available.

This is how a chart comparing the first quarter total live births in 2022 to the previous six years looks. 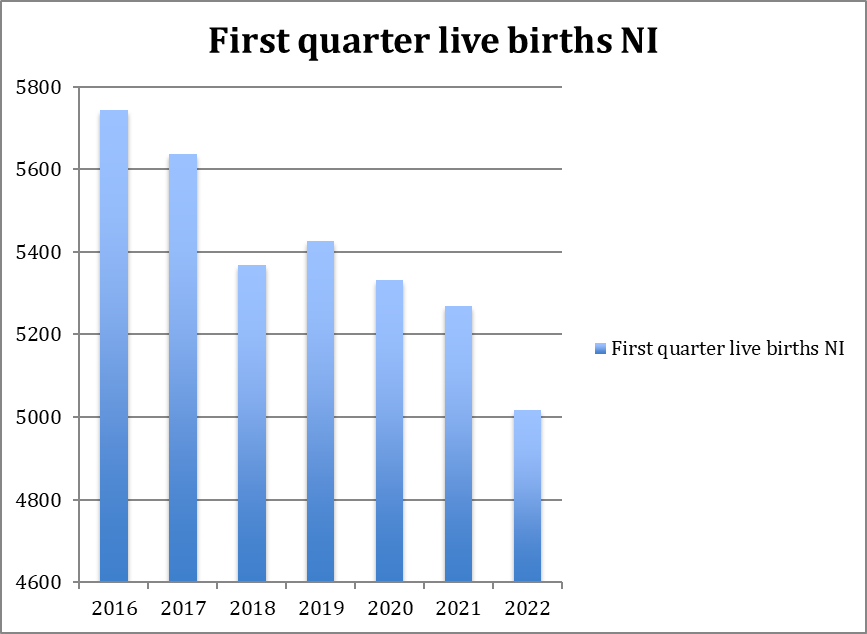 This is a very large drop so the question that must be asked is whether the vaccines had any part to play. If they did, has this resulted in an increased number of stillbirths or miscarriages by women who were vaccinated during pregnancy, or have the vaccines impeded fertility or conception in some way; or rather is it due to a reduced level of conception by women who were vaccinated and subsequently avoided becoming pregnant in the period leading up to and following vaccination?

If we suppose the latter, one would then assume that the statistics would eventually show whether or not the effect is transitory. If it is, then with each subsequent month the live birth statistics will broadly follow the rates of vaccination of the fertile demographic 9 months previously, but if the effect is more chronic each subsequent month will show a falling trend as the total number of vaccinated women in the population increases.

Looking at England and Wales data from UKHSA, it can be seen that the percentage of unvaccinated women giving birth begins to fall rapidly from around May 2021 at a rate of between 5-10% per month.

We can surmise from this that the percentage of unvaccinated women conceiving in 2021 would be similar to this group and thus be a suitable proxy, as expectant mothers and those aspiring to conceive should have a similar risk appetite for taking the vaccines. Thus for example, those giving birth in January 2022 would have an unvaccinated representation at conception similar to women giving birth in April 2021. Here are the two scenarios displayed on the same graph with the 9 month lag between them: 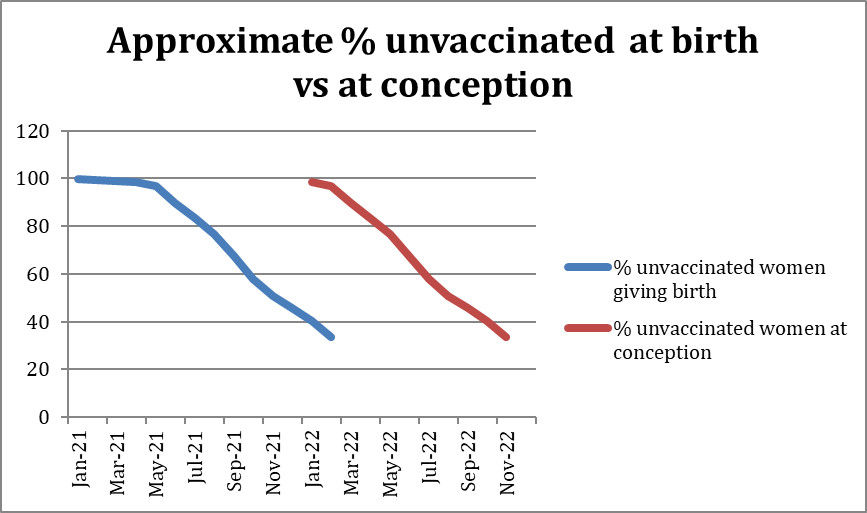 The live birth hard data we have for Northern Ireland are currently only for the first three months of 2022, and those three months correspond to a situation where over 90% of women giving birth were unvaccinated at conception.

The data over the next few months will show that either there is no connection at all to the vaccination campaigns of 2021 or there is an effect which ebbs as we distance ourselves from those campaigns. In the latter scenario there is a question as to whether it is an adverse effect of the vaccine (which may manifest as increased miscarriages and stillbirths, or as reduced fertility) or whether it is due to behaviour change as women avoid becoming pregnant in the period leading up to and following vaccination. In the worst case scenario we will witness a continuing fall in live births due to a significant reduction in overall fertility. [The Daily Sceptic]