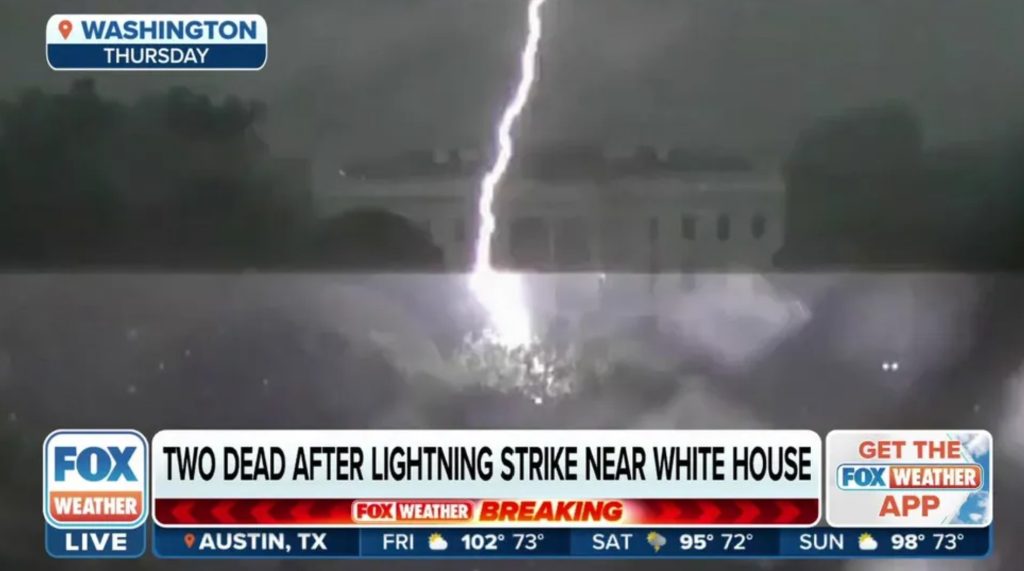 Two people were killed and two others are in critical condition after lightning struck at the park next to the White House in Washington, D.C.

Emergency responders received a report about people found injured in Lafayette Park at 6:52 p.m. on Thursday evening. U.S. Park Police and members of the U.S. Secret Service who were in the area at the time also rushed to assist the four people hurt.

No property or vehicles were damaged by the strike, said D.C. Fire and EMS official Vito Maggiolo.

Protect your home, cars and generators against EMP, solar flare and lightnings…

Our camera was rolling on the White House North Lawn tonight when lightning struck Lafayette Park nearby, injuring four. The thunder was so loud, @gabrielle_ake and I jumped up in fright. “That’s too close — we’re shutting down” advised photographer Ron Windham. pic.twitter.com/oTtU9VeQBw

It is believed that the four might have been struck while they were near a tree during the heavy downpour, said Maggiolo.

On Friday morning, 76-year-old James Mueller and 75-year-old Donna Mueller, both from Janesville, Wis., were pronounced dead, according to the Metropolitan Police Department.

“We are saddened by the tragic loss of life after the lightning strike in Lafayette Park. Our hearts are with the families who lost loved ones, and we are praying for those still fighting for their lives,” White House Press Secretary Karine Jean-Pierre said in a statement.

Protect your home, cars and generators against EMP, solar flare and lightnings…

There is a high probability of more severe thunderstorms today. In light of the tragedy in Lafayette Park, #DCsBravest want you to be weather aware, and follow these lightning safety tips. pic.twitter.com/fTZf1F6tS5

“If you see lightning or hear thunder, you should seek shelter inside of a building or a vehicle. Do not attempt to seek shelter under a tree,” he said.

Billionaires are funding Earth destruction! A billionaire is responsible for a million times more greenhouse gas emissions than the average person

They even try to steal the midterms with geoengineering! Heavy rain in Florida could impact election week as a tropical system heads toward the...

Video: Man forced to rake his way into home due to massive tumbleweed pile