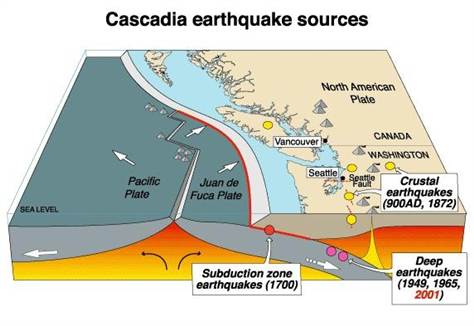 Results of a new subduction zone model were presented last week at the annual meeting of the American Geophysical Union in San Francisco. They emphasize the possibility to use deep Earth tremors to forecast massive earthquakes. In other words: “Can the cumulative effects of many small events trigger a major earthquake?”

The model is based on data collected from the Cascadia subduction zone in the Pacific Northwest which is shaked by tiny tremors, smaller than earthquakes. Unlike its western Pacific cousins (Japan (2011) and in Sumatra (2012)), the Cascadia’s last major quake was reported in 1700.

The model needs refinements. However it is known that tiny deep tremors occur every 15 month and a magnitude-9 earthquake every 500 years. We need to known whether we want to raise an alert every time one of these small events happens.

With just two weeks to go until 2022, the Ring of Fire is suddenly ROARING BACK to life