The unexplained event that was recorded about 1,200 years ago in the tree rings of cedars in a Japanese forest could be related to a gamma-ray burst following a powerful space explosion.

This event could have had considerably enhanced the level of radioactive carbon-14 and beryllium-10 in the trees’ rings. 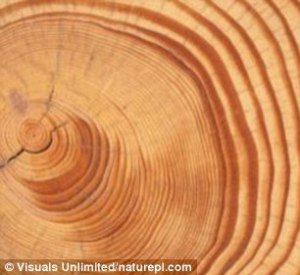 The first findings about the japanese mystery tree rings were reported in the journal Nature and the space explosion hypothesis was published today in the journal Monthly Notices of the Royal Astronomical Society.

In their new study, the two german researchers suggest that a collision of two ‘compact stellar remnants’ such as black holes – or neutron stars or white dwarfs – was responsible for the radiation blast recorded in the Japanese tree rings.

They calculated that this radiation burst (collision) occured between 3,000 and 12,000 light years away from us.