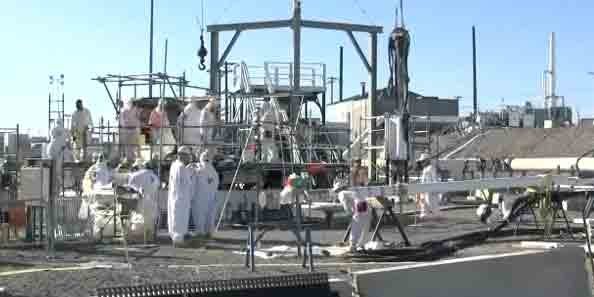 “You couldn’t find a more perfect radioactive storm … I am alarmed about this on many levels. This raises concerns, not only about the existing leak … but also concerning the integrity of the other single shell tanks of this age.” – Gov. Jay Inslee

“We’re out of time, obviously. These tanks are starting to fail now,” said Tom Carpenter of the Hanford watchdog group Hanford Challenge. “We’ve got a problem. This is big.” – Gov. Jay Inslee

“The Columbia River is at stake, all of that area and its vitality” – Gov. Jay Inslee

The long-delayed cleanup of the nation’s most contaminated nuclear site became the subject of more bad news Friday, when Washington Gov. Jay Inslee announced that a radioactive waste tank there is leaking. On Friday, the U.S. Department of Energy said liquid levels are decreasing in one of 177 underground tanks at the site. Inslee said the tank is the first to have been documented to be losing liquids since all Hanford tanks were stabilized in 2005. His staff said the federal government is working to assess other tanks. Newly leaked report warns plutonium levels at Hanford may be much higher than claimed. – ENENEWS