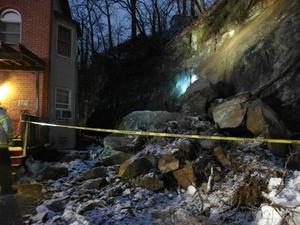 Boulders crashed down in one Bonton’s city neighborhood. Nobody was hurt on Sunday, Feb. 24, after a landslide at 6 Olive St., Brighton, according to the Boston Fire Department. A section of the cliff fell near a single-family home. Boston’s building inspector will examine homes on Olive Street in Brighton on Monday after the weekend storm caused a landslide of rocks and mud. Residents said boulders that came crashing down are part of a retaining wall that gave way on Sunday. Officials says the weekend’s wet weather likely loosened the ground, causing the mud and rocks to tumble down into the street. No one was injured. Comments on this event: “I can’t believe it. This rock wall has been here since I’ve been here in 2006. I really thought it was sturdy, so I’m just shocked it caved in”. Yes buddy, your place was contructed on a unstabilized soil!

Here the link to the story and to a video: WCVB