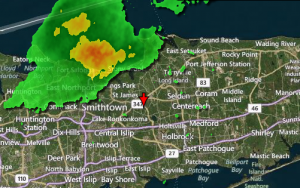 What was that loud boom heard around 9:45 p.m. in Smithtown, NY on March 19 2013? Officials are baffled but investigating. It seems that the loud booms were a ccompanied by a flash of light so I would guess it is either a fireball (meteor strike) or a lightning. This last possibility seems the most probable since the National Weather Service issued a Special Weather Statement regarding a snow squall (a quick-forming storm cell) moving onshore near Northport. Well do we have the answer? Was the loud noise a loud clap of thunder with an associated lightning strike? Although we are not sure, the mysterious noise was likely thunder as lightning detectors at Sikorsky Airport in Bridgeport and Republic Airport in Farmingdale both detected activity in the area of the squall line. – Smithtown Radio

With reports from all over the world of these strange booms, this has got to be the most honest and fair one that I’v seen come from of the mainstreem news.