Nankai Trough quake predicted to cause more damage than the 2011 quake disaster. A government panel has revised sharply upward the estimated damages expected from a quake expected to strike in the Pacific off the coast of central Japan, raising the urgency of disaster preparedness for much of the country’s eastern coast.

The topics of the video are:

Here an article of Japan Daily Press about the Nankai Trough Megaquake:

The Japanese government panel is estimating that a 9.0 magnitude earthquake in the Nankai Trough region will do damage worth $2.2 billion, a figure that is much higher than the $177 million from the Great East Japan Earthquake of 2011. Scientists are predicting that the earthquake is due “in the not-too-distant future”, based on historical rough calculations.

These figures do not include the possible nuclear fallout from an earthquake of that magnitude. The panel also predicts the NUMBER OF EVACUEES TO REACH 9.5 MILLION A WEEK after it hits and that 40 out of the country’s 47 prefectures will suffer damage to their infrastructure. 27.1 million will suffer power outages, while 34.4 million will be without water. 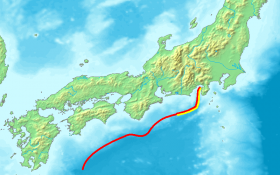 In an earlier report released in August, the panel said around 323,000 could die from an earthquake with its epicenter in the Nankai Trough, also a big number compared to the 19,000 who died or were reported missing in the 2011 disasters. But if all houses and key buildings are already quake-resistant by the time the earthquake will occur, the damage can be cut to almost half at $836 million. That is why the government’s priority would be to come up with basic policy measures by the end of the month against future earthquakes.

The Nankai trough runs from the gulf of Suruga, Shizuoka Prefecture, central Japan, to the sea of Hyuga, off Miyazaki Prefecture in the southwestern Japan region of Kyushu. Historically, this area experiences 8.0 magnitude earthquakes once every 100 to 150 years, with the last one occurring last 1946, where around 1,330 people perished. – Japan Daily Press