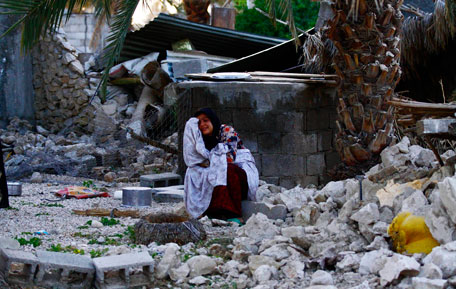 A strong earthquake of 6.2 magnitude hit a remote region of southern Iran at 85 kilometres (52 miles) southeast of the town of Minab, in the southern Hormuzgan province and off the Strait of Hormuz at 0738 IST on May 11 2013, killing one child and injuring at least 20 others. The quake was registered at a depth of 36.44 kilometres (22.64 miles). The quake was followed by a series of aftershocks, measuring between 4.1 and 5.2.

Iran sits on several major fault lines and is prone to frequent earthquakes, some of which have been devastating. At least 40 people were killed across the border in Pakistan where hundreds of mud homes were leveled. Also in April 2013, another quake stroke near Iran’s Gulf port city of Bushehr, killing at least 30 people. – Times of India

Tectonics? Yes most probably… But let think a bit more: It is the second major earthquake to strike close to a region under military tensions and where military forces are conducting multinational exercises nearby. On April 5 2013, a 6.2 magnitude earthquake struck near the border area between Russia, China and North Korea, when tensions were running high between Pyongyang and Washington. The 6.2 quake which struck Iran, near the Middle East stress choke-point of the Strait of Hormuz, comes at a time when 41 nations are conducting naval exercises in the Strait.

Any links? Hoping that our politics understand that they will not only start a war when bombing in the area.
Peace (and love)!