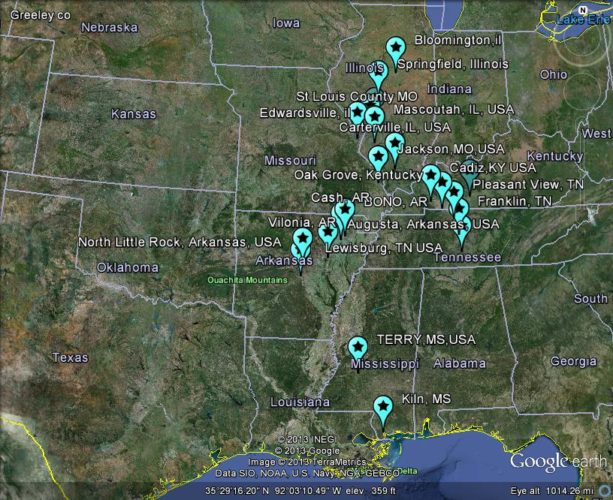 18MAY2013 Jb Augusta, Arkansas, USA 22:40:00 Aprox 4 sec S-N Bright blue green white flashes Bright as the moon flashes as bright as the sun like lightning Small pieces like sparks Could swear I heard a distant jet like noise which may have been an actual jet but it did directly coincide with the meteor so ????

18MAY2013 Michael Schoelzel Mascoutah, IL, USA 22:40 cst the last 2 seconds start east traveled west, I was lookiing south super brilliant white & Green super bright fragmentation yes, looked like it disintegrated with green fragments as it was breaking 2nd probably most amazing thing I’ve seen, right after last weeks observation, interestingly in the same area of the sky from my point of view, simply breathtaking, something is really not right here, I’ve been fascinated with the sky all my life, but only in recent years, or better yet months have I ever witnessed such wild activity, thank you for the interest, I feel better now having reported it!

18MAY2013 Gerard Randolph Lewisburg, TN USA 10:30-40 Central Time It was not beyond 30 seconds.Fiery E-W Was looking at the sky and saw what appeared to be a falling star, but started getting bigger as it kept moving toward the west. Looked like a huge ball of fire. Fiery looking. Towards the tale of it it was falling off. Really an amazing sight!!!

18MAY2013 David Edwardsville, il 22:30:00 aprx 4 to 8 seconds. I was not expecting it Just caught it in the corner of my eye and it got my attention I was facing south it moved from n-e to s-w I saw a bright blue green streak with a long tail. it went out before hitting the ground. it was EXTREMELY close at least as bright as a full moon I could see larger lighted pieces falle from the tail area. i think I caught a faint sight of something after light went out. like I said It was CLOSE It was awesome. i am not a star gazer but wish I had my camera. – Lunar Meteorite Hunters