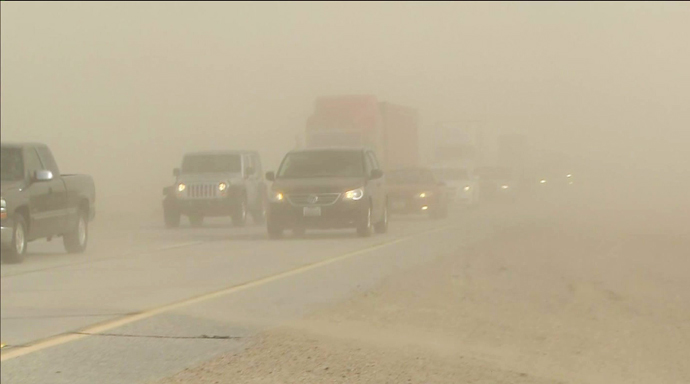 A dust storm in Lancaster Tuesday afternoon caused several vehicle collisions and prompted the closure of the Antelope Valley (14) Freeway for a few hours when 60 mph winds kicked up a massive sandstorm. Six people were hurt in two separate pile-ups blamed on the sandstorm – one involving 20 vehicles, the other involving five vehicles.

Wind gusts up to 60 mph kicked up a massive sandstorm in Lancaster Tuesday forcing the hours-long closure of the Antelope Valley (14) Freeway, where at least two massive pile-ups occurred, according to the California Highway Patrol.

Both sides of the 14 Freeway were closed between Avenue A and Avenue D. The shutdown began about 4:45 p.m. and ended shortly after 8 p.m. – KTLA