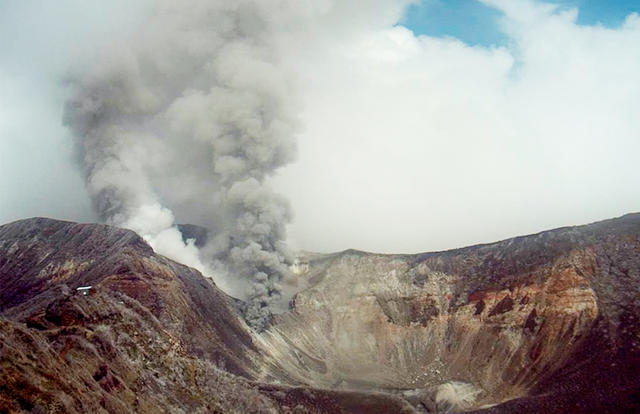 At 5 a.m. Tuesday morning, the Turrialba Volcano, located east of the province of Cartago, began to spew gas and ash from two crater openings. By 8:30 a.m. a significant amount of volcanic material was released from the two openings of volcano. It is uncertain what will happen. All nearby communities remain vigilant in coming hours. The trail of gases and ash can be seen from various locations in the provinces of Cartago, San José, Heredia and Limón. The last eruptions of the volcano were in 1884. – Tico Times

An increase in seismicity since 26 April triggered VSI to rise the alert status from 2 to 3 on a scale of 1-4 (from “Waspada”, “watch” to Siaga”, alert). For the moment, only degassing has been observed as surface activity.
A similar increase in seismic activity was observed in Oct 2012, when the alert was raised as well and then reduced again in November. – Volcano Discovery

Alaska’s remote Pavlof Volcano has been shooting lava hundreds of feet into the air, but its ash plume is thinning and is no longer making it dangerous for airplanes to fly nearby. Seismic tremors from the 8,262-foot volcano have been going up and down, but remain at a fairly high level. Scientists are not expecting the eruption to end anytime soon but so far it has not been explosive. There are mud flows, but no one close enough to be threatened. – ABC News