FIVE people have died after a 10-metre wide sinkhole opened up at the gates of the Huamao Industrial Park in Shenzhen, the southern Chinese boom town neighbouring Hong Kong. 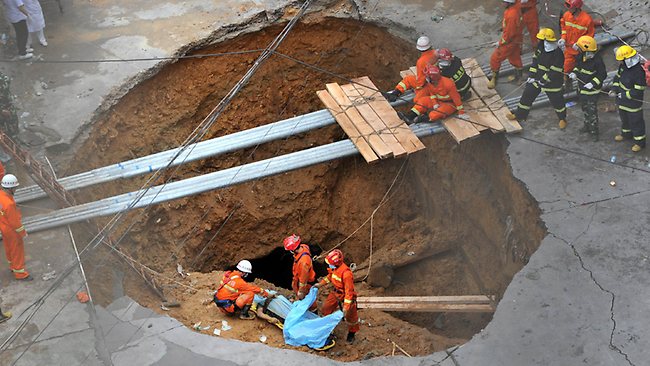 It is still unknown how many people had fallen into the hole in total. – Herald Sun

BOCA RATON, Fla. – A twenty feet wide and five feet deep sinkhole opened up in the Boca Raton neighborhood Monday afternoon 20 May 2013 which was caused by a water main break and heavy rains. The sinkhole swallowed part of a school bus but all the students on board got off safely. A tow truck was able to pull the school bus out of the hole and tow it away around 6:30 p.m. The ground is unstable and not safe for residents to be on. – WPTV

Tallahassee, FL – The body of a man who drowned in a sinkhole on Sunday, May 19 2013 was recovered at around 9:30 Monday morning. He and some friends were swimming at a sinkhole off of Crawfordville Highway Sunday when Hollis jumped into the water and began struggling to swim. Help from his friends was unsuccessful. An autopsy is being conducted today to determine his official cause of death. – WCTV

Several roads in Flowery Branch and parts of Hall County caved in during the storm on Sunday, May 19 2013 and blocked several neighbours as the sinkhole blocked the only way in and out of their subdivision. The storm washed away part of Stephens Road between McKenzey Lane and Pipissewa Drive. A sin hole developed and washed away part of Trudy Drive. Fortunately neighbors were not stranded. Downstream there was something at the railroad track that stopped the water from going into Lake Lanier. At one point it appeared to be about a 10-foot wall of water higher on our side of the tracks that the lakeside. – CBS Atlanta