What a discovery! Scientists  have detected antimatter in solar flares via microwave and magnetic-field using data provided by NASA’s Solar and Heliospheric Observatory (SOHO), and radio images at two frequencies from Japan’s Nobeyama Radioheliograph. 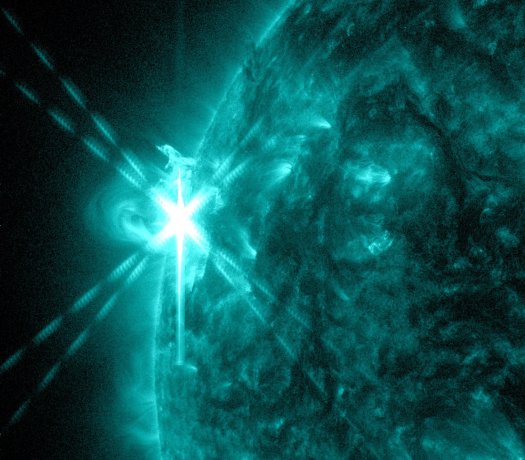 Actually, it’s not a surprise, that such particles are created in solar flares, but this is the first time their immediate effects have been detected.

This research sheds light on the puzzling strong assymetry between matter and antimatter using the Sun as a laboratory. The research – “Discovery of Relativistic Positrons in Solar Flares with Microwave Imaging and Polarimetry” – will be presented at the 44th meeting of the American Astronomical Society’s Solar Physics Division of the American Astronomical Society, held in Bozeman, Montana, July 8-11 2013.

Implications of this study are far-reaching for gaining valuable knowledge through remote detection of relativistic antiparticles at the Sun and, potentially, other astrophysical objects by means of radio-telescope observations. The ability to detect these antiparticles in an astrophysical source promises to enhance our understanding of the basic structure of matter and high-energy processes such as solar flares, which regularly have a widespread and disruptive impact on our planet.