Do you hear the Taos Hum?

Discover what’s behind this mysterious noise! 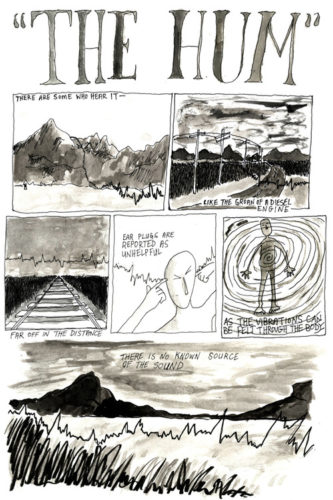 Citizens in Britain and portions of the Southwestern U.S. have been complaining about a maddening hum that just won’t go away. And researchers have been unable to pinpoint its source. Not everyone can hear the low-pitched hum, and those who do say that it seems artificial in nature – and is driving them crazy. In 1977, a British newspaper received nearly 800 letters from people complaining of loss of sleep, dizziness, shortness of breath, headaches, anxiety, irritability, deteriorating health, inability to read or study because of the incessant hum.

Most famous in the U.S. is the “Taos Hum“. There the annoyance was so acute for the “hearers” in Taos, New Mexico that they banded together in 1993 and petitioned Congress to investigate and help them find the source of the noise. Scientists from the state’s national laboratories and several universities descended on Taos to measure everything from seismic and electro-magnetic vibrations to the sensitivity of the human ear. No conclusive causes were discovered. One prevailing theory holds that the hum is created by a military communications system used to contact submarines.

Most hearers say the noise begins abruptly, never abates, interferes with sleep and is more noticeable inside a house or car than outside. Some describe it as sounding like a diesel engine idling in the distance. Since it has proven undetectable by microphones or VLF antennae, its source and nature is still a mystery.