November 3, 2014 marked the anniversary of the first Earth-born creature circling our planet from Space.

Laika boarded Sputnik 2 and was blasted into orbit on November 3, 1957. This infographics features some of these incredible animal astronauts! 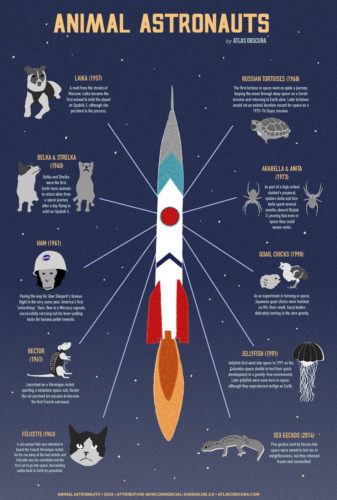 While it was revealed in 2002 that Laika had died from overheating just hours after launch, her journey symbolically stands as the beginning of guided space exploration.

Laika was far from the last astro-beast!. Humans have indeed employed a whole menagerie of other animals in experiments in space survival – from cats to rats to spiders to unfortunate geckos and turtles.

None of them chose to go on such voyages, and while there is something somber in that lack of consent, these brave creatures are also representative of the expansion of possibility in space exploration.