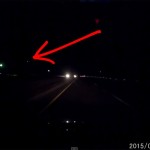 So it’s true: The early bird gets the fireballs.

A “bright green” fireball soar across the sky before it burned out over the mountains of Colorado.

The object had a flaming tail with a long trail behind it. Look at this small ball flying from middle of the screen to the left across the screen (@0:05):

According to witnesses, as it moved towards the far horizon it started to flame out, but even after the tail was gone a bright orange ball was still visible till it disappeared beyond the far mountain range.

It must have been pretty incredible. The amazing fireball lasted for what seemed like around 10 seconds.

The fireball, which could have been a meteor, satellite debris or a warning shot from an alien warship, was first reported on Twitter.

Did you see this ball of fire striking Colorado’s sky? Probably not as loud as this Florida’s fireball!