Like most people, I enjoy nothing more than hearing about impossible sounding tales of earthly anomalies, paranormal phenomenon, the “unknown” and so on.

One of which I’ve come across, one I’m sure many know about is called the Mysterious Zone of Silence (Zona del Silencio). 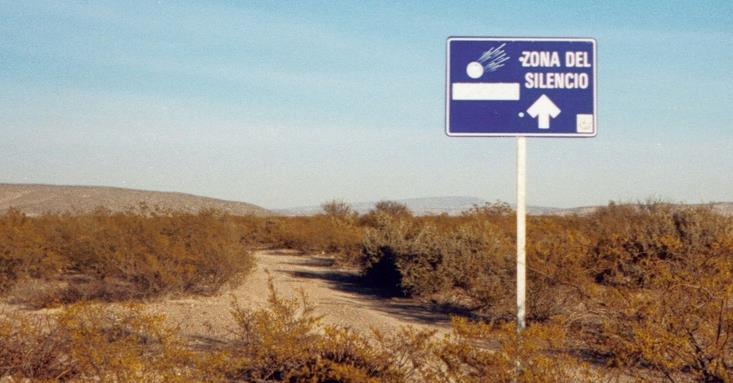 La Zona Del Silencio, or the Zone of Silence, is a patch of desert in a place known as the Trino Vertex.

The first incident here occurred in the 1930’s when a pilot – Francisco Sarabia – was flying over the area and claimed his instruments went wild and his radio stopped working.

Later, in the 1970’s, attention was drawn to the area when a faulty American missile was fired from the White Sands Missile Base in New Mexico and crashed – or perhaps was pulled? – into the region. The Mexican government allowed U.S. Air Force officials to investigate the crash at the site. It was discovered that no signals of any sort are able to penetrate the area – including radio and satellite signals  – due to local magnetic fields that create a dark zone, a zone of silence.

A Mexican government research center has now been constructed and studies the unusual local habitat and wildlife. And probably more than they are admitting!

Are the high levels of magnetite and uranium deposits, responsible for electromagnetic pulses that are said to be the source of the disrupted signals?

Why are so many meteorites crashing around the zone? Because of its magnetic properties?

Moreover, many UFO sightings and alien encounters have occurred in the zone of silence. Could it be a portal for aliens?

And what about the strange lights that appear from nowhere have been observed by ranchers? And the burned brush and vegetation at the touchdown sites of unexplainable flying objects – some being described as ‘disc-like’.

Finally, the Zone of Silence is geographically parallel with the Egyptian pyramids and the Bermuda Triangle, and is located just north of the Tropic of Cancer. Scientists at the Mexican research center have coined the area the Sea of Thetys because it lay at the bottom of an ocean millions of years ago. Can any of this explain the numerous strange incidents here?

No concrete evidence has been found to support the claims of extraterrestrial activity in this area, though there are undoubtedly several occurrences that cannot be explained. Could this area possibly be another Bermuda Triangle of activity? It certainly exhibits similar behaviors! Is it in a certain way another Area 51?

This zone of silence is certainly a hotbed of unexplained activity that requires more exploration.