Over the past week, a lava lake in Hawaii has been rising!

And occasionally it has been flowing over its rim into the crater it’s located within. Discover amazing images and videos of this geological phenomenon!

The lava lake, which has been active since March 2008, is inside an open vent located within Halemaumau Crater on Kilauea volcano. 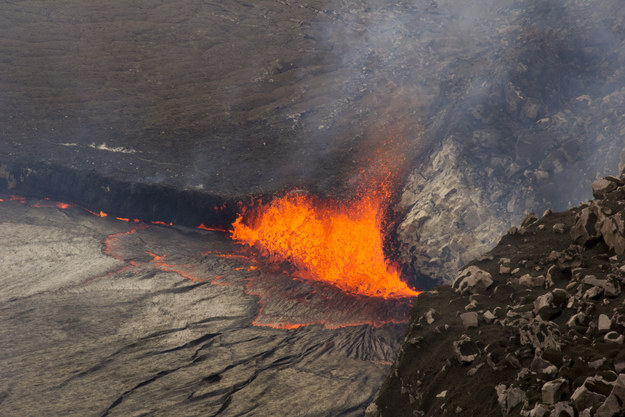 This is the first time lava from the vent has been viewable from a public platform within Hawaii Volcanoes National Park.

The lava lake has been seen splattering above the crater rim, and rocks can be heard rumbling as the walls of the crater expand with heat.

On Tuesday, and again on Wednesday, the lava briefly overflowed the lake’s rim. Moreover, a rockfall on Tuesday also triggered a large explosion, which hurled chunks of lava onto the rim of Halemaumau Crater, which is about 270 feet above the lake.

The last time molten lava was visible in the crater was in 1982 when a fissure erupted, and the last lava lake located there was in 1974. In 1924, there was a huge eruption inside the volcano that doubled the diameter of Halemaumau Crater to roughly the size it is now.

From 1967 to 1968, the entire crater was filled with molten lava, and as a result a “bathtub ring” can still be spotted on the walls of the crater where the lava was at that time.

More pictures and videos of this rare geological phenomenon to find on Buzzfeed.