Heavy rainfall has transformed the desert north of the Saudi capital, Riyadh, into what resembles a small sea, with only one road rising above the vast expanse of water.

Anomalous weather in Saudi Arabia killed at least 7 within the last two days. 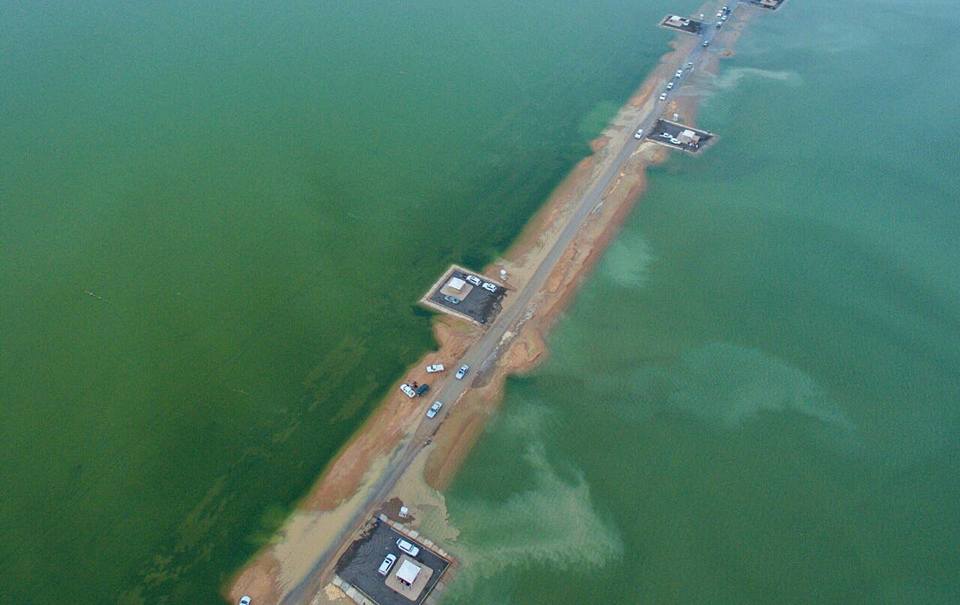 After the anomalous snow that covered deserts in Saudi Arabia one week ago, now, the Riyadh desert is flooded and looks like a huge sea.

If you don’t believe me, watch this unbelievable video by Mohammad Al-Taweel which shows the flood waters stretching out for miles:

And now look at the sandy water rushing down the desert:

Meanwhile, at least seven people died and many others were injured or trapped by heavy rain and floods that swept various regions of Saudi Arabia.

The dead included three young Saudi men in Bisha, two others in Baha and two expatriates who were struck by a thunderbolt in Qunfudah. 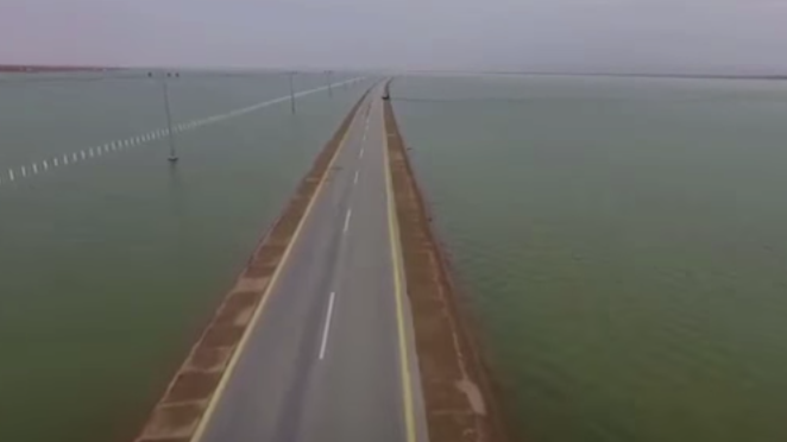 Torrential floods also destroyed a number of houses, blocked roads and overturned vehicles. The rain and floods in the last few days uncovered the ineffective drainage systems in many parts of the country.

The two expatriates were killed by a thunderbolt, which also injured two of their companions in Qunfudah governorate in Makkah province. Civil Defense teams rushed the victims to hospital. 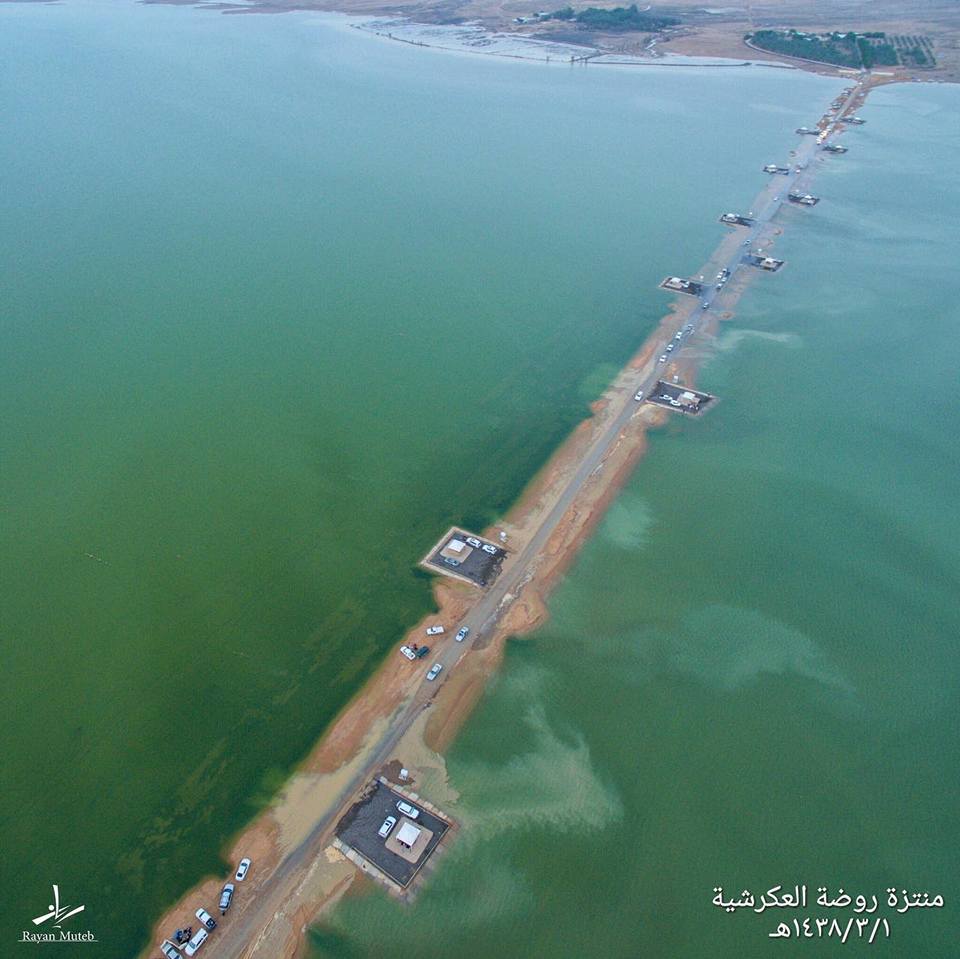 The rain inundated various parts of Qunfudah governorate and washed away large sections of the International Road linking Jeddah and Jazan.

Heavy rain lashed Bisha for more than three hours. Three people were killed and two others injured in a traffic accident in the city. 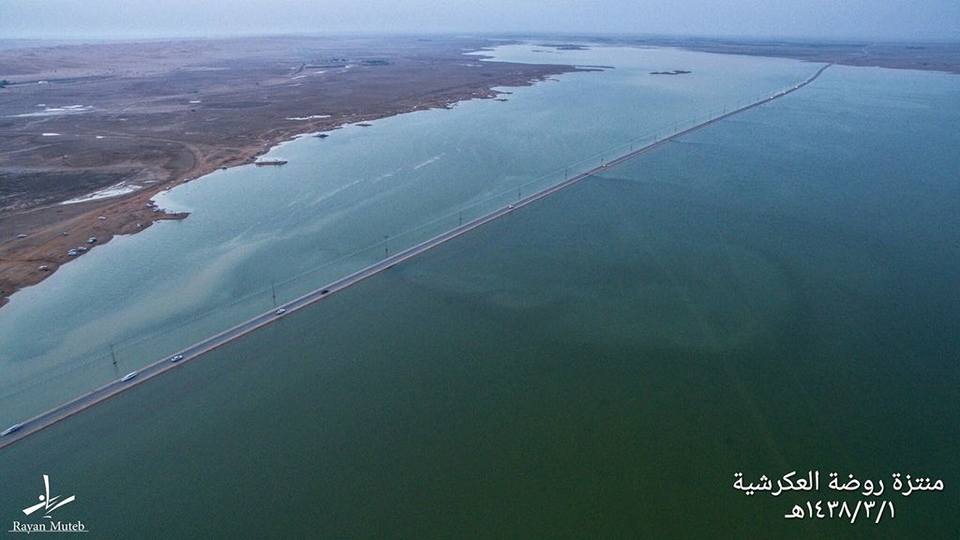 The rain flooded Wadi Houran, in the southwest of the governorate, causing cracks in the road leading to Arar in the north of the Kingdom. The rain also caused a number of cars to overturn or skid off roads.

The traffic department warned citizens and expatriates against going out during heavy rain. Police said a number of traffic accidents took place in the region but there were no deaths or serious injuries. 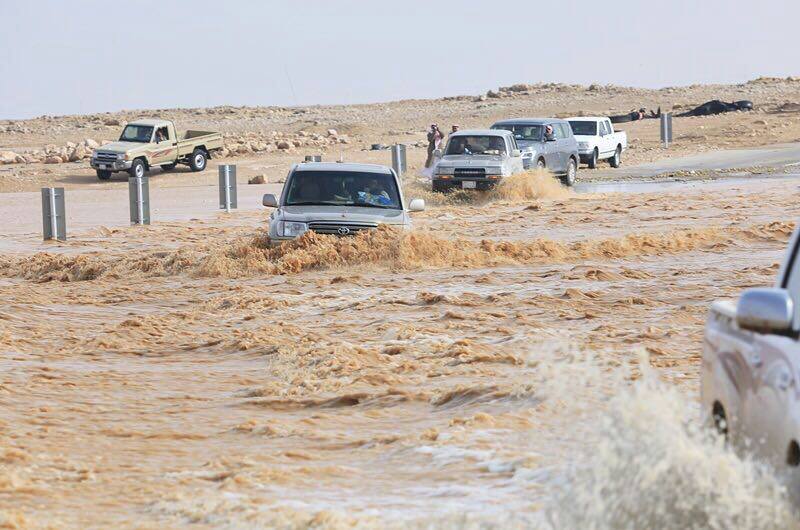 In Mahayil Asir, students of an elementary school were trapped for three hours in Wadi Mumadad. Their school suspended classes. Many other schools in the region did the same after receiving warnings of heavy rain from the Presidency of Meteorology and Environmental Protection.

Asir Civil Defense spokesman Col. Mohammed Al-Asmi said an Egyptian was rescued from Wadi Zura in Al-Bark governorate. He was reported to be in good health. 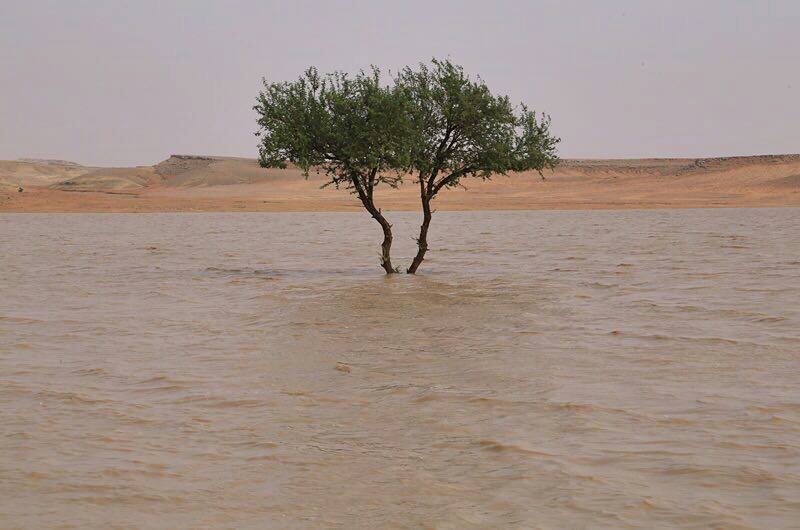 The Civil Defense also hauled a vehicle that was trapped in Al-Lahman Valley. There were also landslides on Bark-Mahayil Asir Road.

King Khalid University’s Women’s Campus in Tihama and other schools in Mahayil Asir and Al-Qura governorate have suspended classes and asked their students to stay at home. The Civil Defense rescued a number of teachers who were trapped in Suyool Valley. 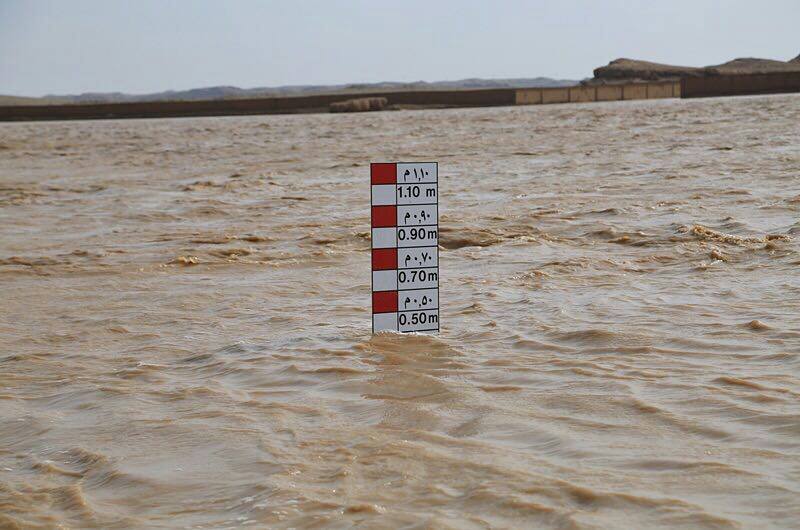 In Riyadh, a Public Security aircraft evacuated two people after their cars were washed away in Wadi Ghilanah, about 15 km from the capital city. Traffic police shut down a road to prevent motorists from getting caught by floodwaters.

Heavy rain has flooded the intersection of Al-Hayer Road with Arafat Bridge in the south of the Saudi capital. Police redirected traffic to the north. 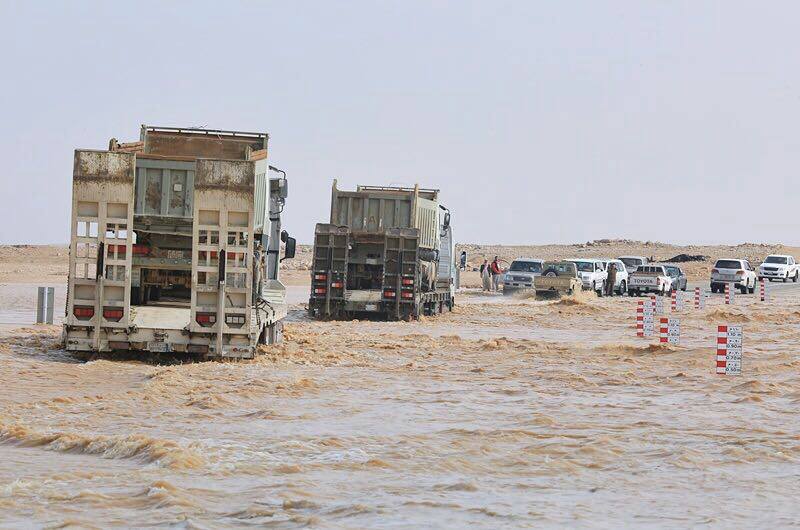 They also closed down exit 18 and exit 19 to prevent motorists from approaching flooded areas. In Baha, where two people were killed and six others injured.

Two people were hit by lightning on Sunday during heavy rain and thunderstorm in the province. Baha Red Crescent spokesman Emad Al-Zahrani said the Red Crescent received reports of two expatriates being hit by a thunderbolt in a village in Al-Qura governorate. Paramedics transported the victims, who sustained severe burns in various parts of their body, to Al-Mandaq Hospital. 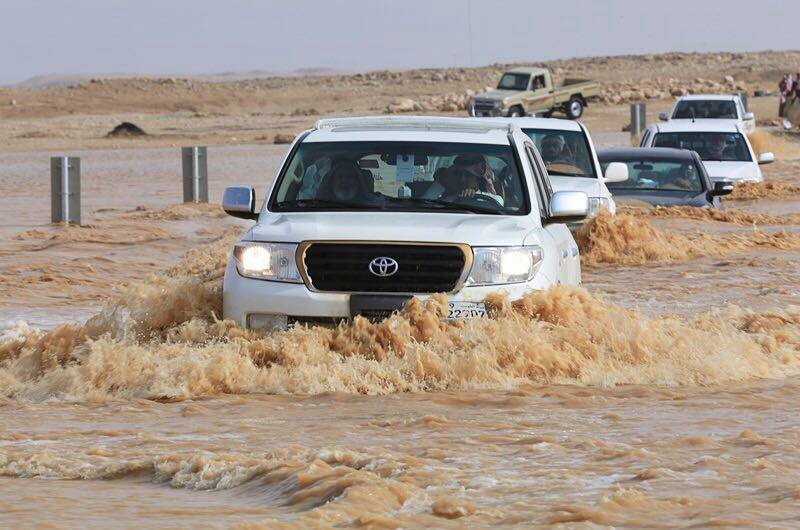 The municipality and the traffic department monitored roads to offer assistance in emergency cases. The municipality received several reports of people being trapped or having electricity cut off.

The municipality has its maintenance team in the field and ready to clear sewage canals from falling boulders that may clog the passages. The police are well prepared to rescue people trapped by floods. Many people are rescued by volunteers. 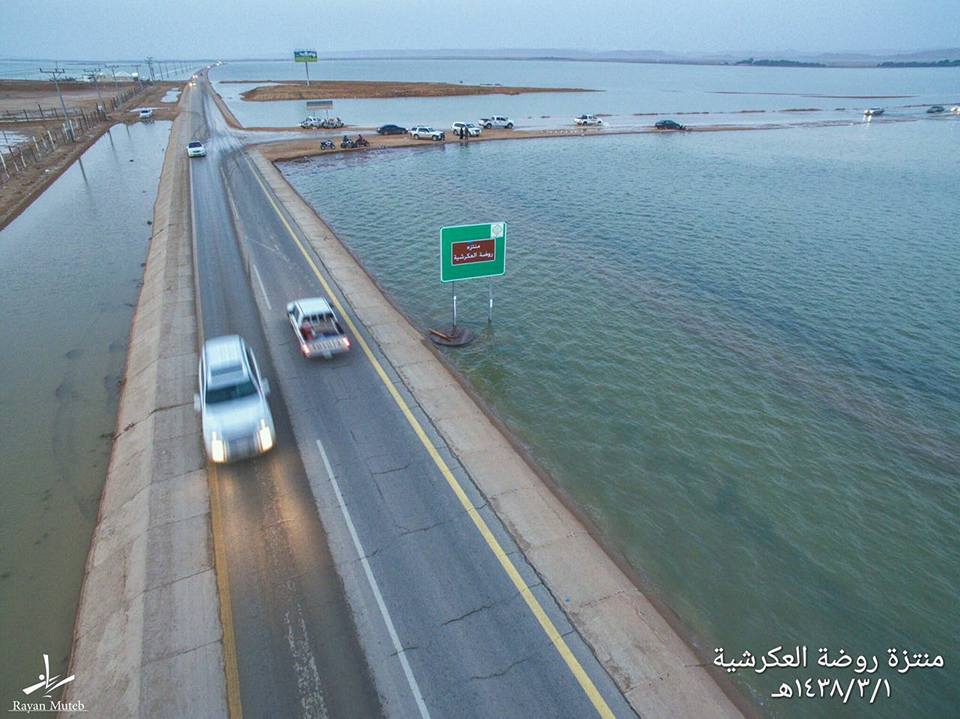 In Al-Darb, to the north or Jazan, a number of houses collapsed and electricity was cut off to the city. There were several traffic accidents in the area.