A line of strong thunderstorms on the wet side of Winter Storm Harper spun up several tornadoes in Mississippi, Alabama and Florida Saturday, including an EF2 tornado that caused extensive damage in Wetumpka, Alabama.

Only one minor injury was reported.

“We have several buildings downtown with serious structural damage,” Sheriff Bill Franklin. “People may not be able to see that damage. The buildings are in danger of collapsing. We don’t want anymore injuries than we already have.”

Franklin said a curfew would be in place from 6 p.m. ET Saturday until 6 a.m. ET Sunday.

Buildings on Tyndall Air Force Base in Florida were damaged by a possible tornado early Saturday evening, according to base officials.

Tornadoes aren’t rare in January in the USA, but are mostly restricted to the South and lower Midwest states with just a hint of West Coast. 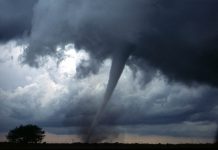 New Tornado Record for Oklahoma in Tornado Alley Set in 2019 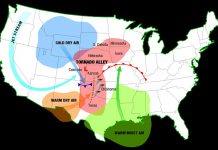 Tornado Alley: These Maps Show Where Most Tornadoes Hit in the USA 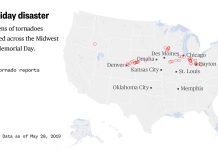 After 13 straight days of devastating tornadoes, 39 million are still under severe weather threat in the US