A thicket of red tape and regulations have made it difficult for volcanologists to build monitoring stations along Mount Hood and other active volcanoes.

Mount Hood in Oregon is one of 161 active volcanoes in the United States, many of them in the Pacific Northwest’s Cascade Range.

In the 1780s, the volcano rumbled to life with such force that it sent high-speed avalanches of hot rock, gas and ash down its slopes. Those flows quickly melted the snow and ice and mixed with the meltwater to create violent slurries as thick as concrete that traveled huge distances. They destroyed everything in their path.

Today, the volcano, a prominent backdrop against Portland, Ore., is eerily silent. But it won’t stay that way.

Mount Hood remains an active volcano — meaning that it will erupt again. And when it does, it could unleash mudflows not unlike those from Colombia’s Nevado del Ruiz volcano in 1985. There, a mudflow entombed the town of Armero, killing roughly 21,000 people in the dead of night.

On Mount Hood, “any little thing that happens could have a big consequence,” said Dr. Moran, scientist-in-charge at the federal Cascades Volcano Observatory.

And yet the volcano is hardly monitored. If scientists miss early warning signs of an eruption, they might not know the volcano is about to blow until it’s too late.

Determined to avoid such a tragedy, Dr. Moran and his colleagues proposed installing new instruments on the flanks of Mount Hood in 2014. Those include three seismometers to measure earthquakes, three GPS instruments to chart ground deformation and one instrument to monitor gas emissions at four different locations on the mountain.

But they quickly hit a major hiccup: The monitoring sites are in wilderness areas, meaning that the use of the land is tightly restricted. It took five years before the Forest Service granted the team approval in August.

The approval is a promising step forward, but Dr. Moran and his colleagues still face limitations, including potential legal action that may block their work.

Such obstacles are a problem across the United States where most volcanoes lack adequate monitoring. Although federal legislation passed in March could help improve the monitoring of volcanoes like Mount Hood, scientists remain concerned that red tape could continue to leave them blind to future eruptions, with deadly consequences.

Listening For Rumbles and Belches

The United States is home to 161 active volcanoes, many of which form a line along the west coast through California, Oregon, Washington and Alaska. Seven of the 10 most dangerous American volcanoes are within the Cascade Range, and six of those are not adequately monitored.

In contrast, countries like Japan, Iceland and Chile smother their high-threat volcanoes in scientific instruments.

“The U.S. really doesn’t have anything to this level,” said Erik Klemetti, a volcanologist at Denison University in Ohio.

Yet there is no question that better monitoring could save lives. Volcanoes don’t typically erupt without warning. As Mount St. Helens awoke in May 1980, a series of small earthquakes could be felt on the surface nearby. Shortly thereafter, the volcano started to deform. Steam explosions sculpted a new crater, while a bulge emerged on the volcano’s north flank. Earthquakes continued, landslides rumbled and ash-rich plumes erupted — all before the main event.

Although not all volcanoes follow such a steady, pre-eruptive pattern, they typically either tremble, deform or belch volcanic gases — meaning that if scientists monitor these three signals, they will likely be able to forecast when a volcanic eruption will happen.

Take Hawaii as an example. Shortly after earthquakes picked up at the Kilauea volcano on April 30, 2018, scientists at the Hawaiian Volcano Observatory could tell that the were not only increasing, but they were also propagating to the east.

“That was not only cool, it was vital for emergency management,” Dr. Moran said.

Scientists used those signals to project where magma might erupt, and planners evacuated residents in that area. The eruption destroyed more than 700 homes, but remarkably no one died.

And it was all thanks to 60 seismic stations located across the island.

Dr. Moran and his colleagues had that example in mind as they pressed their case for adding instruments to Mount Hood.

They submitted a proposal to the Forest Service in 2014. But the instrument — which will be housed in four-feet-tall boxes with radio antennas and solar panels on the outside — violate the Wilderness Act, which prohibits any new structures and even noise pollution within federal wilderness areas.

“I see the Wilderness Act as nature’s bill of rights,” said George Nickas, the executive director of Wilderness Watch, a conservation group that opposed volcano monitoring in federal wilderness. “I think it is so important to have places like that where we can just step back, out of respect and humility, and appreciate nature for what it is.”

In reviewing Dr. Moran’s proposal, the Forest Service provided the public with an opportunity to comment, during which they received more than 2,000 statements — most of which agreed that the wilderness needs safeguarding.

To Jonathan Fink, a geologist at Portland State University who also wrote a public comment in favor of volcano monitoring, this argument is misplaced.

“I’m all for protecting wilderness,” Dr. Fink said. “But this is just a question of public safety. And I think letting a helicopter in to put some instruments in that can then be monitored remotely seems like a pretty minor exception to the wilderness policies.”

Even so, many critics argue that we can’t make even a single exception — or there won’t be wilderness at all.

Other critics say the project is far from necessary. “If we can do something like land one of those landers on Mars, we can move a few miles back from a volcanic feature and monitor it from a little further away,” said Bernie Smith, a retired employee of the Forest Service who wrote a public comment against the project.

But Dr. Moran and others argue that the work is not possible unless they get up close, and before the volcano begins to rock.

“The name of the game is to be able to detect and correctly interpret these warning signs as soon as possible — to give society as much time as possible to get ready,” Dr. Moran said.

When Mount St. Helens first began to rumble, scientists couldn’t tell if the quakes originated under the volcano itself or five miles away at a nearby fault. They only had one seismometer two miles to the west of the volcano. So they rushed to place more instruments on its slopes (a risk that would not be allowed today) and within days they knew the volcano itself was shaking.

“Looking back on it, it’s really miraculous that they were able to do what they did,” Dr. Moran said.

Scientists have since learned that we don’t always get as much time as Mount St. Helens allowed. At Calbuco, a volcano in southern Chile that’s similar to the volcanoes in the Cascades, all was quiet during the early afternoon of April 22, 2015. But tremors began in the late afternoon, and by 6:04 p.m. local time, the mountain was sending a plume of gas 10 miles into the sky.

With such a narrow window, the first line of defense is to have a solid monitoring network in place whenever a volcano awakens.

“You’re going to either get in there ahead of time and put in the instrumentation you need, or you’re just going to accept that you’re going to go blind into the entire eruptive period and whatever happens, happens,” said Jacob Lowenstern, a geologist with the United States Geological Survey.

Not If, But When

Although none of these volcanoes appear to be building toward an eruption today, there is no question that they pose a serious hazard.

“The U.S.G.S. has a deep understanding that these volcanoes are going to erupt again — within our lifetimes, our children’s lifetimes,” said Carolyn Driedger, a hydrologist at the Cascades observatory. “The evidence is all there.”

Beyond Mount Hood, Mount Rainier near Seattle could also unleash viscous volcanic mudflows. There, 80,000 people live in the path of disaster and yet the mountain only has 19 instruments, which scientists say is not enough given its vast size.

And even volcanoes that don’t loom so close to populated areas could have far-reaching effects.

Glacier Peak in northern Washington has produced some of the most explosive eruptions in the contiguous United States, meaning the ability to throw enough ash into the air to halt air traffic for days or even weeks and cost billions of dollars. It has only one seismometer.

Without equipment to detect the eruption, airplane passengers just might find themselves living a high-altitude nightmare. In 1989, a Boeing 747 flew through an undetected ash cloud in Alaska. All four engines shut down and the airplane went into a nose-dive. It descended 13,000 feet before the pilots were able to restart the engines. Hundreds of thousands of people fly across the West Coast and above active volcanoes every day.

Eruptions in Alaska and California would also be felt across the nation. Anchorage is a major cargo hub, meaning that many FedEx or U.P.S. packages travel through Alaska. But an eruption might bring that to an alarming halt. And because California produces a large portion of the nation’s food, an eruption might limit the fruits and vegetables found at supermarkets as far as the East Coast.

“We’re not just doing this for academic purposes. This is so we can give good information to emergency managers,” Dr. Driedger said. “That’s the end in all of this.”

Despite the permit’s recent approval, Dr. Driedger notes that there are still a number of steps before any instruments can be placed on Mount Hood. They will now have to choreograph the assembly of instruments, hire personnel and schedule helicopter trips around weather and other potential obstacles.

Moreover, the Forest Service and the observatory could still face a legal challenge from Wilderness Watch or other groups that adds years to the installation, if not blocking it altogether.

“This is more proof that the Forest Service has abandoned any pretense of administering wilderness as per the letter or spirit of the Wilderness Act,” said Mr. Macfarlane, whose group is discussing litigation with an attorney but has not yet decided whether to file suit.

And then there is more work to be done monitoring other hazardous volcanoes beyond Mount Hood.

Volcanologists across the nation were pleased this March when Congress passed the National Volcano Early Warning and Monitoring System Act, which seeks to ensure that volcanoes nationwide are adequately monitored.

But the bill is only an authorization — meaning that Congress has not actually invested the $55 million over five years required to apply for new permits, install more equipment and pay to monitor 34 of the nation’s most dangerous volcanoes. Nor will it change the fact that scientists like Dr. Moran must still grapple with regulations protecting federal wilderness.

So Dr. Moran, aware that litigation is a possibility, is moving forward with caution. This month, his team will begin to install monitoring stations at Mount Hood. He then hopes the Forest Service will issue a permit to install equipment at Glacier Peak, then turn back to Washington’s Mount Baker. Eventually he would like to install more instruments on Mount Hood, but first he needs to create sufficient networks elsewhere.

While they wait, Dr. Moran and his colleagues will hold their breath, hopeful that these volcanoes stay in a deep slumber, but aware that one just might rouse at any moment.

Always be prepared for the next eruption. 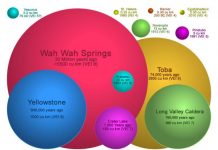