Torrential downpours ripped down parts of a mountainside above the village of Queja, Guatemala burying dozens of people in their homes in up to 50ft (15 meters) of mud.

Meanwhile, 21 dead have been digged out but, according to officials, there are still more than 100 missing people and rescue efforts have been called off, maybe permanently as the situation is too dangerous.

The church in the village has been transformed into a morgue as seen in the video below:

Some of the houses in Queja are under 50ft of mud. The torrential downpours make the soil too loose to safely work, and trigger new landslides forcing workers to flee to safer ground.

Now, Eta is approaching the southern tip of Florida, with further destruction expected.

The storm is expected to hit Cuba by early Sunday, and approach the Florida Keys and south Florida late Sunday or Monday.

There are terrible stories of survivors losing all their family after the montain collapsed.

For example, Gloria Cac said 22 family members were missing after the mountain collapsed. Yes, all her family is gone, she’s the only survivor. Her dad, mom, siblings, aunts and uncles, grandparents, they’re all gone. Twenty-two family members and it’s just her alive.

Queja had been home to about 1,300 people. Not all its houses habe been buried in the wall of mud… But more than enough.

President Alejandro Giammattei on Friday suggested up to 150 people could have died in the Queja landslide.

Hurricane Eta spread destruction from Panama to Costa Rica, Nicaragua, Honduras and Mexico, killing at least 65 people. Its level of devastation recalls Hurricane Mitch, which killed some 10,000 people in Central America in 1998. 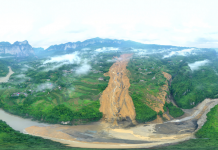