“We’ve got twice as much coral as we had after huge cyclones went through the reef in about 2011 and 2012, and this record-high coral cover is despite supposedly having three catastrophic unprecedented bleaching events in just the last five years.

“So you’ve just got to wonder were those bleaching events maybe as catastrophic as these experts supposedly claimed.”

The annual data on coral cover for the Great Barrier Reef, produced by the Australian Institute of Marine Science shows that the amount of coral on the reef is at record high levels. Record high, despite all the doom stories by our reef science and management institutions.

Like all other data on the reef, this shows it is in robust health. For example, coral growth rates have, if anything, increased over the past 100 years and measurements of farm pesticides reaching the reef show levels so low that they cannot be detected with the most ultra-sensitive equipment.

This data is good news. It could hardly be better. But somehow, our science organisations have convinced the world that the reef is on its last legs.

How has this happened?

One reason is that occasionally colossal amounts of coral are killed, mostly by cyclones, but also by crown of thorns starfish and bleaching. So the media, with its predilection for bad news, can be fed a regular diet of doom. Our scientists are always happy to oblige. The quiet recovery is generally downplayed or ignored.

Growing up in Innisfail, adjacent to the reef, in the early 1970s, I recall the initial doom stories about the reef.

The scientific study of the reef had only just started, and plagues of starfish that eat the coral had just been discovered and were making headlines worldwide. The reef had, supposedly, only a decade left.

It was reasonable in the ’70s to be concerned about these plagues and they ultimately precipitated AIMS’s long-term monitoring of coral and starfish in the ’80s. I was working at AIMS when this important work started, and it is interesting to look back on what has changed. The coral cover is no less, the number of starfish is no more, but the number of scientists and managers working on the reef has exploded. Perhaps this is the problem.

In 50 years we have now learnt a great deal about the cycles of coral death and regrowth. The data reported every year by AIMS shows all areas go through these cycles every decade or two.

Remarkably, even the excellent news of record coral still has the scientists pessimistic. The reef is, apparently, still doomed from climate change and this is just a temporary reprieve.

How good does the data need to be to make them admit the reef is fine?

The science institutions have been claiming that there have been three disastrous bleaching events in the past five years, which does not accord with the latest statistics.

Record coral cover means there was no disaster on the reef. The only disaster is the quality assurance at the science organisations.

An examination of the data shows that, while there have been three events, they occurred in largely different regions in each year. The reef has thus effectively had one major bleaching event in the past five years and the previous major event was in 2002. So the reef has had roughly one event in 15 years, and most of the coral on the reef did not bleach, and most that bleached did not die. Therefore, it is not surprising that the reef is in good shape.

The science institutions have been caught out by their own deception. They exaggerated the bleaching events – as usual. Luckily, we have the AIMS long-term coral monitoring surveys, which are done professionally with good-quality protocols, to demonstrate the state of the reef.

The bad news is that the record high coral cover means it is likely that coral cover will decline in the next few years. Prepare for the headlines saying the reef has lost much of its coral and is indicative of climate change and farmers polluting the reef. And the reef will be predicted to be gone by 2050 – or whenever. 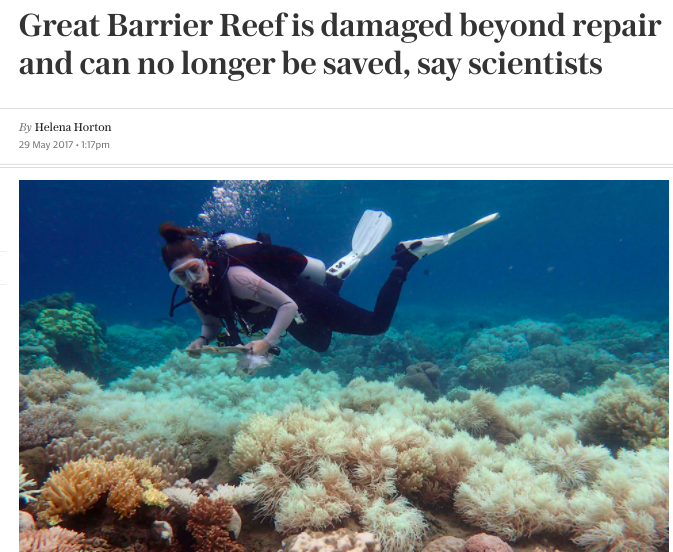 When will these doom stories about the reef, which have been going for 50 years, cease?

Will it be like the Ancient Greek legend of Prometheus, who was chained alive to a rock so that his liver could be eaten by an eagle, only for the liver to grow overnight so that it could be eaten again and again? Will the agony ever end?

According to legend, Heracles saved Prometheus. Who will be our Heracles, and support better quality assurance of the science?

It should be the Great Barrier Reef Marine Park Authority, but so far it has not been interested. The various ministers could also take an interest.

In the meantime, don’t forget we have record high levels of coral. It is time to stop scaring the children with doom stories about the reef.

Recently, a M9.5 earthquake was removed from all seismic maps and quake alerts around the world… Another data manipulation?