The U.S. Navy says that releasing any additional UFO videos would “harm national security” and told a government transparency website that all of the government’s UFO videos are classified information.

In a Freedom of Information Act request response, the Navy told government transparency site The Black Vault that any public dissemination of new UFO videos “will harm national security as it may provide adversaries valuable information regarding Department of Defense/Navy operations, vulnerabilities, and/or capabilities. No portions of the videos can be segregated for release.”

The Black Vault was seeking all videos “with the designation of ‘unidentified aerial phenomena.’”

This is an interesting response from the Navy because, often, military agencies will issue a so-called GLOMAR response, where they neither confirm nor deny that the records (in this case videos) exist, and refuse to say anything more. In this response, the Navy is admitting that it has more videos, and also gives a rationale for releasing three previous UFO videos.

“While three UAP videos were released in the past, the facts specific to those three videos are unique in that those videos were initially released via unofficial channels before official release,” it said.

And it continued: “Those events were discussed extensively in the public domain; in fact, major news outlets conducted specials on these events. Given the amount of information in the public domain regarding these encounters, it was possible to release the files without further damage to national security.”

Prepare Now! You will never go without electricity with this portable power station!

It’s true that the three videos—which were leaked to former Blink-182 singer Tom DeLonge and the New York Times—didn’t originally come out via official means. But in recent years, the Pentagon has regularly talked about UFOs, and earlier this year it showed additional clips from UFOs to Congress.

The military has seemingly wanted to tell the public and Congress that UFOs are very much real and a threat, and that it needs more funding to determine what they are and, perhaps, protect us against them. But it continues to hold the videos close to the vest.[DON-NAVY-2022-010360, Black Vault, Vice] 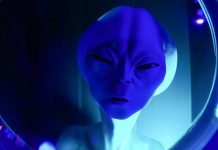