A new study reports the discovery of a 200-kilometre-wide (125-mile-wide) impact zone of a huge asteroid in southern Australian outback which represents the third largest asteroid impact site on the planet. This impact changed the face of the world forever about 300 million years ago. About 30,000-square kilometres of terrain were altered by some kind of shock. Based on calculations, this asteroid measured six-mile wide and the impact resulted in a huge seismic wave which literally destructed the Earth at a global scale. Of course this asteroid measuring 10 to 20 kilometres in diameter was a giant compared to the plunging meteor that exploded above Russia a week ago. Besides leaving a vast crater, now buried under more than three kilometres of sediment, it would have released huge amounts of dust and vapour that would have blanketed the Earth. Scientists believe this meteor was part of a cluster about 360 million years ago since many very large impacts occured at that time which caused mass extinction. 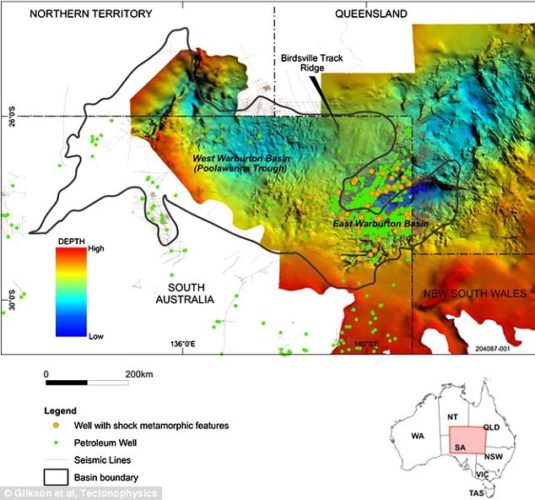 Despite the recent Russian meteor and the 45-metre wide asteroid dubbed 2012 DA 14 that whizzed past Earth last week, events of the scale of the Australian asteroid were extremely rare. They fall once in every several tens of millions of years comparing it to once a century for the meteor shower. Results will be published in the journal Tectonophysics this month. – Daily Mail

Do not worry to much about such events! I think nuclear accidents and climate change are more actual challenges and problems we are facing! Keep cool!

About impact craters: Impact craters, like those we observe on the moon, also occur on Earth. They result from the collisions of extraterrestrial bodies (like meteorites, asteroids or comets) with the Earth. Planetary scientists study Earth’s impact craters to gain insight about the early history of the Earth and the Solar System. Recent studies indicate that large impacts on Earth may have played an important role in the succession of life on Earth.

About Australia impact craters: Australia is a very good place to observe and study impact craters. Much of the Australian surface is very old, so Australia has collected more impacts than many other parts of the world. Because of the dry climate, the craters haven’t weathered away, nor are they hidden by dense vegetation.