There are many legendary cities around the world.

Discover a compilation of 9 ancient mythological kingdoms hidden in oceans across the globe! 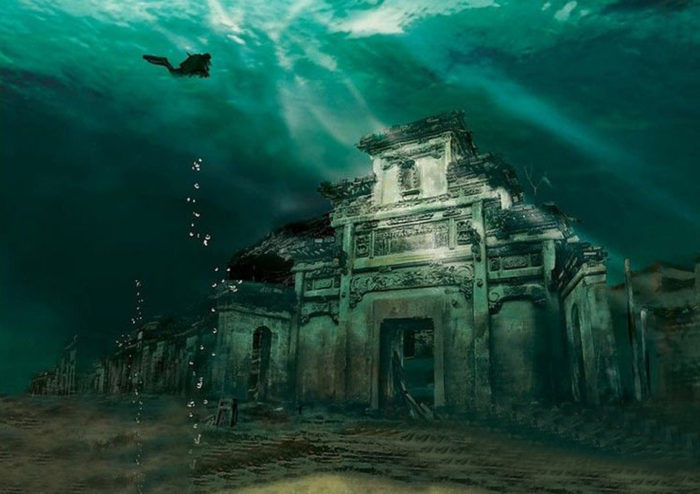 Alexandria, the royal quarters of Cleopatra, was discovered off the shores of Alexandria (city of Alexander the Great). Historians believe the site was submerged 1500 years ago by earthquakes and tidal waves, yet, astonishingly, several artifacts remained largely intact. Amongst the discoveries were the foundations of Cleopatra’s palace, shipwrecks, red granite columns, and statues of the goddess Isis and a sphinx. A team of marine archaeologists, led by Frenchman, Franck Goddio, began excavating the ancient city in 1998. The Egyptian Government plans to create an underwater museum and hold tours of the site.

The Bay of Cambay was discovered by marine scientists in early 2002. The city is located 120 feet underwater in the Gulf of Cambay off the western coast of India. The city is five miles long and two miles wide, carbon dating estimates the site to be a whopping 9,500 years old, and, more amazingly, architectural and human remains are still intact. The discovery astounded scientists because it predates all other finds in the area by 5,000 years, suggesting a much longer history of the civilization than was first assumed. Marine scientists used sonar images and sum-bottom profiling to locate the lost ruins and it is believed the area was submerged when the ice caps melted in the last Ice Age. The Indian nationals have dubbed the find ‘Dwarka’ (The Golden City) in honor of ancient submerged city said to belong to Hindu god, Krishna.

Some 68 miles past the east coast of Taiwan, off the coast of Yonaguni Islands, a sunken ruin was discovered by a sport diver, in 1995. The ruins are estimated to be around 8,000 years old. It is still unclear which missing city they made up. The most spectacular discovery amongst the submerged ruins is a large pyramid structure, finely designed archways resembling the Inca civilization, staircases and hallways, and carved stones. Controversies have arisen around this mysterious pyramid since it seems the carvings have been made right out of bedrock in a teraforming process using tools previously thought unavailable to ancient cultures of the region.

Qiandao Lakeis a man-made lake located in Chun’an County, Zhejiang, China, formed since the completion of the Xinanjiang hydroelectric station. There are 1,078 large islands in the lake and a few thousand smaller ones. It covers an area of 573 km² and has a storage capacity of 17.8 km³. The total area of the islands in the lake is about 86 km².

According to historical records, the 2 ancient cities were called Chun’an and Sui’an which were built in A.D.208. At the foot of the Wu Shi mountain (Five Lion Mountain) lays an ancient city known as Shi Cheng (Lions City), built in Dong Han period (25 – 200), first was setup as county in 208, it was named “Lion City” because of the Five Lion Mountain that sits just behind the city. Flooded in September 1959 for the Xin Anjiang Dam project, the city remains undisturbed from the surface at a depth of 26-40m. The two ancient cities had ever been the vital communication lines for the business men to launch out since the Han and Tang Dynasty. The supernatural workmanship of architecture there is a real mystery.

A team of scientists continues to explore megalithic ruins found in the Yucatan Channel near Cuba. They have found evidence of an extensive urban environment stretching for miles along the ocean shore. Some believe that the civilization that inhabited these predates all known ancient American cultures. So far, only computer models of this mysterious underwater city exist.

The city of Pavlopetri, underwater off the coast of southern Laconia in Peloponnese, Greece, is about 5,000 years old, and is the oldest submerged archeological town site. Pavlopetri submerged town is located between the Pavlopetri islet across the Elafonisos village and the Pounta coast. The coast, the archeological site as well as the islet and the surrounding sea area are within the region of the Elafonisos Municipality, the old “Onou Gnathos” peninsula (according to Pausanias). It is unique in having an almost complete town plan, including streets, buildings, and tombs.

It was discovered in 1967 by Nicholas Flemming and mapped in 1968 by a team of archaeologists from Cambridge. It has at least 15 buildings submerged in 3 to 4 metres (9.8–13 ft) of water. The newest discoveries in 2009 alone cover 9,000 m2. Earlier, the ruins were dated to the Mycenaean period, 1600-1100 BC. Later studies showed an older occupation date starting no later than 2800 BC, so it also includes early Bronze Age middle Minoan and transitional material. It is now believed that the town was submerged around 1000 BC by the first of three earthquakes that the area suffered. The city of Pavlopetri is part of the underwater cultural heritage as defined by the UNESCO in the UNESCO Convention on the Protection of the Underwater Cultural Heritage.

Baiae was an ancient Roman town overlooking the Bay of Naples, where rich Romans and emperors whiled away their time in their villas. It was also connected to the Roman Empire’s biggest naval base, Portus Julius. However, the town and port were built on a tract of volcanic land, the activity of which is said to have caused the structure to collapse into the ocean.

8. Port Royal, Jamaica
Once known as the ‘Wickedest City on Earth,’ Port Royal on the island of Jamaica was one of the largest towns in the English colonies during the late 17th century. It was a haven for privateers and pirates, such as the famed Sir Henry Morgan, due to its excellent geographic location in the middle of the Caribbean. From Port Royal, these buccaneers preyed upon and plundered the heavily laden treasure fleets departing from the Spanish Main. Unfortunately, the glory of Port Royal was short-lived. On the morning of June 7th, 1692, a massive earthquake hit Jamaica. The tremors rocked the sandy peninsula on which the town was built, causing buildings to slide and disappear beneath the sea. An estimated 2000 Port Royalists were killed immediately in the disaster. Many more perished from injuries and disease in the following days.

9. Kwan Phayao, Thailand.
In itself perhaps not unusual, a 500 year old Thai temple sits at the bottom of lake Phayao. What makes this case strange is that the lake was actually made intentionally about 70 years ago.

I probably missed some other amazing sunken cities around the world… Submit them in the comments below! Thanks!