Tehran, the capital of Iran, is battling an invasion of “genetically mutated” giant rats.

They weigh up to 11 pounds, are larger than the average-sized cat and shot at night by 10 army sniper teams. 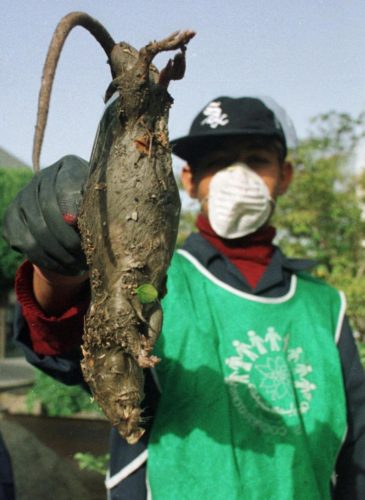 A university professor says these rats seem to have had a genetic mutation, probably as a result of radiations and the chemical used on them. Indeed, Tehran’s rats show changes such as in size and in appearance that normally take millions of years of evolution.

Cats are now smaller than them. Traditional poison appear to have no effect on them. So far 2,205 rats have been shot dead, but the war is far to be won and the council is planning to bring the snipers team up to 40.

Well you should probably stop your nuclear program!

Or find some new solutions. For example, last year, the South African township of Alexandra took a different approach to ridding the area of rats.

In order to help solve the infestation, the city gave out 100 cages residents as part of a campaign, which awarded a free cell phone to every inhabitant who caught and trapped 60 rats.

In this movie, scientists, cavers and wildlife filmmakers found a giant rat on the remote tropical island of New Guinea near giant extinct volcano – Mount Bosavi.