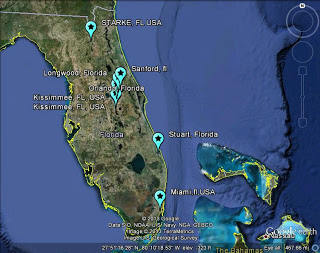 Yesterday evening, a fireball was witnessed in many Florida’s counties. As previously presented here, meteorites can produce sonic booms while they enter atmosphere. So could some booms heard in NCF be related to this meteor fall? I would say that lots of things speak for this hypothesis (time and area at least!). Here the link to the Florida Booms.

Initial Sighting Reports-
21mar2013 Amanda Miami,fl,USA 2215 eastern About 2-3 seconds SE Blue/green Very bright like a firework Not that I was able to see Was traveling SE continuing in that direction

I am in new smyrna beach also. On central florida’s east coast and saw an object like a shooting star but much closer and with a bright greenish tail that burned out as it came towards the ground…? this was around 10pm eastern time i think. -steve holvik

West Delray beach fl….. It looked like a green flare falling from sky but didn’t float like flare it came down on a solid diagonal line with a small tale. Color not lime not quite crayon green. It was large in size like no shooting star I’ve ever seen. Date 3/21/13
I feel like I’m crazy. Nicki B.