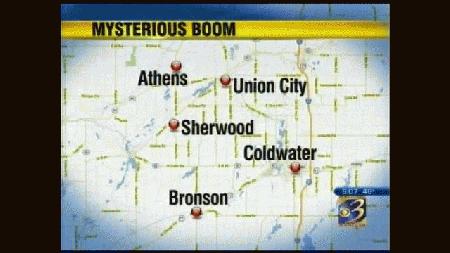 BRANCH COUNTY, Mich.- More than 30 calls coming into the Branch County 911 Dispatch Center this weekend about mysterious booms. All from the northwest part of the county. Many residents in the area thought someone was breaking into their home. While others were speculating that the booms were coming from the Air National Guard Base in Battle Creek. There were no earthquakes recorded in the area overnight, the National Guard base in Battle Creek says there were no flights there last night. Officials are looking into these reports and say they don’t have any idea where the booms are coming from or what the sound could be.

Sorry, I wasn’t able to take away the video ads!

Here a link to the previous post I wrote about this Michigan event.

It seems that each person reporting the booms believed the “exposions” happened somewhere close. Here some more reports about it:

“We just heard a really loud bang outside our house and me and my kids are really scared, I don’t know what it is and now we’re afraid to outside.”

“I didn’t see anything but I heard a big boom…it was like a big boom like someone was kicking in the door.”

“It sounded like a cannon going off is the only way I can describe it, kind of like a thunder boom but it was only the one time.”

The booms occurred almost exactly at the same times as last year as indicated by this witness:
“It’s the same time as last year, we had these loud crashing noises like either an explosion or a sonic boom kind of an earthquake.”

And watch another video on these mysterious booms here!

Share with us your reports and your thoughts about these mysterious sounds in Michigan either by submitting a comment on this blog or by connecting to facebook page. Thank you for your information!