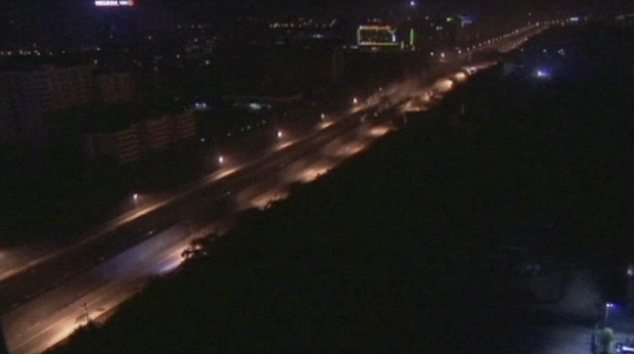 In a breathtaking orgy of flashes, bangs and perfectly-timed destruction, a two-mile viaduct is blown to smithereens in China. Bomb experts spent weeks poring over blueprints of the Zhuan-yang viaduct in Wuhan, in Heibei province, in a bid to work out how to raze the structure to the ground without leaving even a single concrete slab still standing. It is the most difficult demolition ever undertaken in China for it is closely surrounded by residential buildings, and runs along 100,000-volt wires, over 30 underground pipelines including the main pipeline transmitting natural gas from west to east China. And as this amazing footage shows, their plans went by without a hitch, even breaking the record for the longest concrete bridge ever successfully demolished in China.

Built in 1997, the Zhuan-yang viaduct, which is located in southwest Wuhan, capital of central China’s Hubei Province, used to be an important part of China’s National Highway 318. It runs from Shanghai to Tibet and is to be replaced by a 6-lane, 5.1-kilometer long viaduct as its design capacity is far below what needed.