The 2013 floods across Germany, Austria and central Europe have been unprecedent in intensity!

Here a remarkable collection of aerial photographs which shows the extent of the damage in Magdeburg, Germany, after the Elbe burst through a local dam. 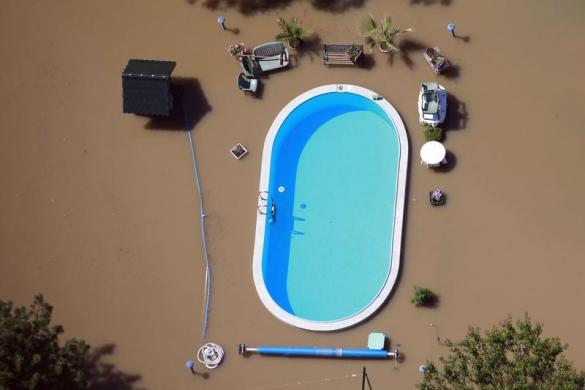 Waters of the Elbe river during flood a residence near Magdeburg in the federal state of Saxony Anhalt, June 10, 2013. REUTERS/Thomas Peter.

Weeks of torrential rainfall have sent water levels skyrocketing throughout central Europe. The Elbe and Danube rivers, among others, have swollen to the point of overflow, while breached levees and ruined damns have loosed deadly floodwaters upon Germany, where tens of thousands have been evacuated from their homes. 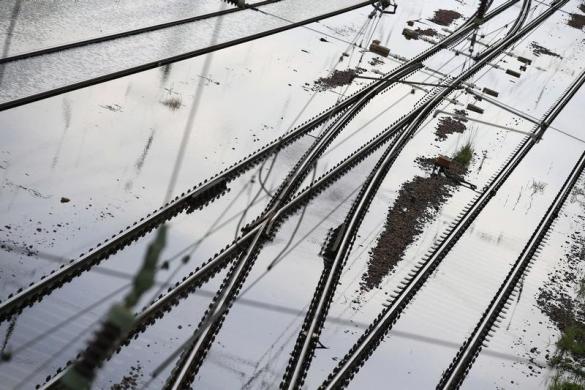 Flooded railway tracks are pictured near the river Elbe in the eastern German town of Schoenebeck, south of Magdeburg, June 9, 2013. REUTERS/Tobias Schwarz

It is estimated that damages in Germany, alone, will amount to more than $6-billion euros when all is said and done. “When Dresden flooded 11 years ago, they called it the flood of the century, saying the last time it had happened was 150 years before,” said Dresden resident Christa Pohl last week in an interview with The Guardian. “The fact it has happened again, and so soon, fills me with a sense of foreboding.” 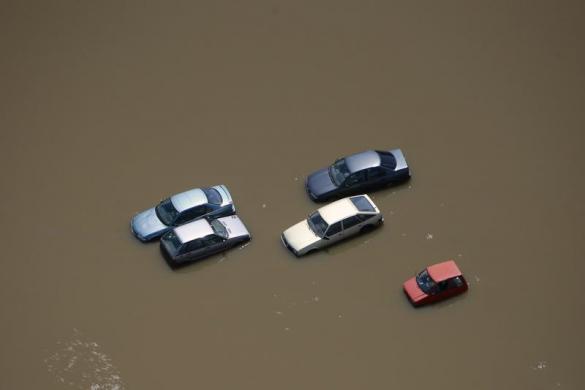 Cars are inundated by the waters of the Elbe river during floods near the village of Fischbeck in the federal state of Saxony Anhalt, June 10, 2013. REUTERS/Thomas Peter

According to climate scientist Mojib Latif from the Helmholtz Center for Ocean Research in the German Baltic city of Kiel, Pohl is right to be concerned. “In the 1990s we had ‘once-in-a-century’ floods. Then we had them again in 2002, and now in 2013 we are seeing the same again,” said Mojib Latif in a recent interview with Deutsche Welle. “What used to happen once in a century could well become an event that recurs every decade or so.” 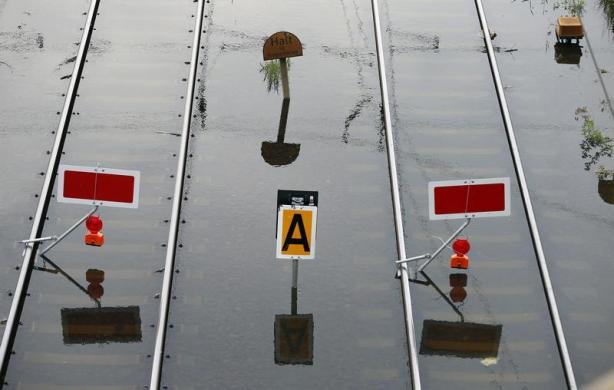 Flooded railway tracks are pictured near the river Elbe in the eastern German town of Schoenebeck, south of Magdeburg, June 9, 2013. REUTERS/Tobias Schwarz

Images of natural disasters always serve as a humbling reminder of nature’s raw, uncontrollable power; but the role of water in Central Europe’s current plight seems particularly relevant in light of recent findings, which suggest scientists may actually be underestimating the extent of future sea-level rise. 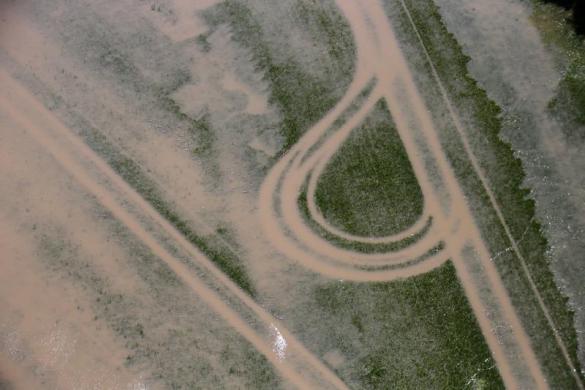 An aerial view shows the waters of the Elbe river inundating agricultural fields during floods near Magdeburg in the federal state of Saxony Anhalt, June 10, 2013. REUTERS/Thomas Peter

But how much of the flooding in Central Europe is due to climate change? Analysis of local weather trends extending as far back as 1871 “indicate an increase in severe rainfall events,” but it’s still difficult to say. In the end, it’s likely infrastructure and land management will also shoulder much of the blame. 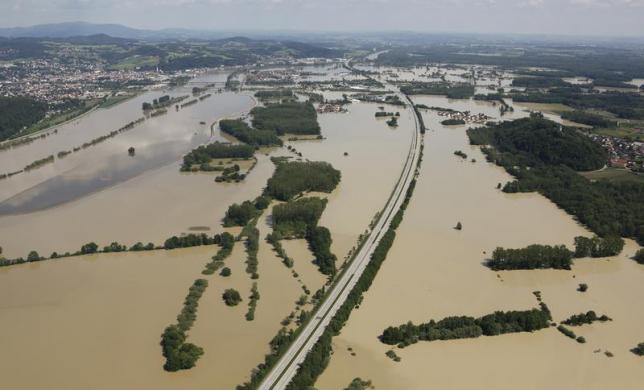 The A3 motorway is flooded by the Danube (L) near the eastern Bavarian city of Deggendorf, June 5, 2013.
REUTERS/Wolfgang Rattay

While it is premature to pin the heavy rainfall on climate change, it could be partly to blame, says Stéphane Isoard of the European Environment Agencyin Copenhagen, Denmark. But he says bad land management is just as important. “We build over the land and there is urban sprawl, so there is less opportunity for water to infiltrate the soil.” With more floods inevitable because of the wetter weather predicted by climate change, Isoard says Europe needs to adapt to a new world of frequent inundation. 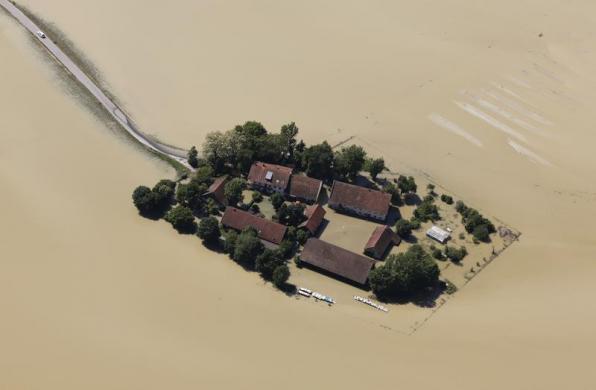 A car leaves a small settlement surrounded by the floods of the river Danube near the eastern Bavarian city of Deggendorf, June 5, 2013. REUTERS/Wolfgang Rattay

“Over the last 20 years, events like this have become more common,” saysIain White of the University of Manchester in the UK. Central Europe has improved its flood responses since severe floods struck in 2002, he adds, “but there comes a point where you can’t defend” when there’s simply too much water. 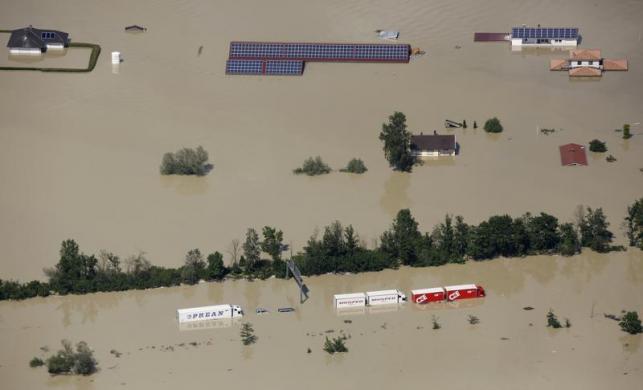 Stranded trucks are seen on the flooded motorway A3 near the eastern Bavarian city of Deggendorf, June 5, 2013.
REUTERS/Wolfgang Rattay

“We may have to let some areas flood,” civil engineer Paul Kirshen recently told The Atlantic in an interview about what sea-level rise could mean for the future of Boston, a coastal city on the North Atlantic. “We may have to live with water.” His words are seeming more farsighted – and globally relevant – by the day. 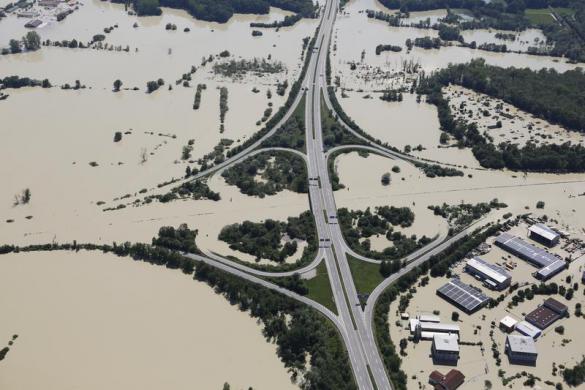 The highway crossing of the A92 (L) and the A3 (top) is flooded near the eastern Bavarian city of Deggendorf, June 5, 2013. REUTERS/Wolfgang Rattay

In Austria, mobile flood walls were installed to counter the raising rivers!