Are you scared of sharks? Well some are not and even drive hundreds of miles to La Jolla, California to swim with these large and frightening fishes.

The leopard sharks of La Jolla are a phenomenon very unique to San Diego County. The unusual site often occurs during the warm summer months off the coast of San Diego. The sharks congregate in large numbers close to shore – and close to swimmers.

This video is pretty amazing. Even these leopard sharks are harmless to people, I would be quite sweating.

Where can you see leopard sharks?
Leopard sharks are common in these waters, but the mass gathering happens exclusively at La Jolla Shores Beach, along the relatively calm and flat waters of the popular family beach. Specifically, the leopard sharks are swimming more often along the shallows of the southern part of La Jolla Shores. The beach area off of the Marine Room at the La Jolla Beach and Tennis Club is commonly called “Shark City” and lies in the area that is three to ten feet deep. 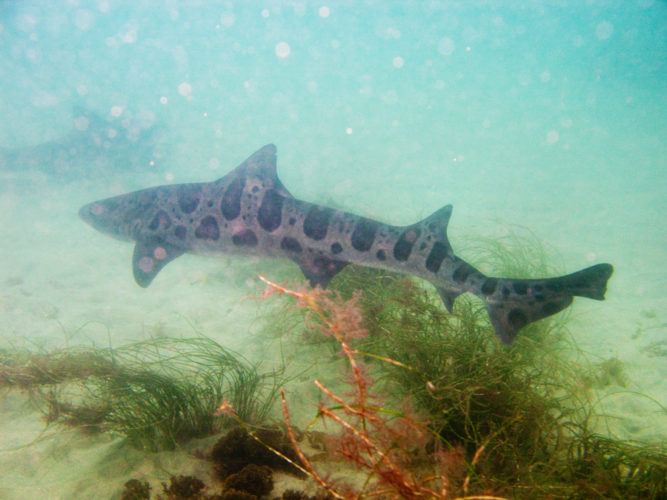 Why do the sharks gather in La Jolla?
No one is exactly sure why the leopard sharks love La Jolla. Scientists speculate that the sharks are there to to help themselves gestate in the warm, calm water since females far outnumber males in the La Jolla waters.

Are leopard sharks dangerous?
The leopard sharks (Triakis semifasciata) are totally harmless. They are gray and spotted and the sharks tend to grow up to seven feet in length although they are usually less than or around five feet. Don’t worry, leopard sharks don’t eat humans and in fact they are timid bottom feeders, with a small mouth suited for that food source. The sharks are are often scared of divers’ bubbles and swimmers’ movements, which makes their La Jolla gathering even more curious. 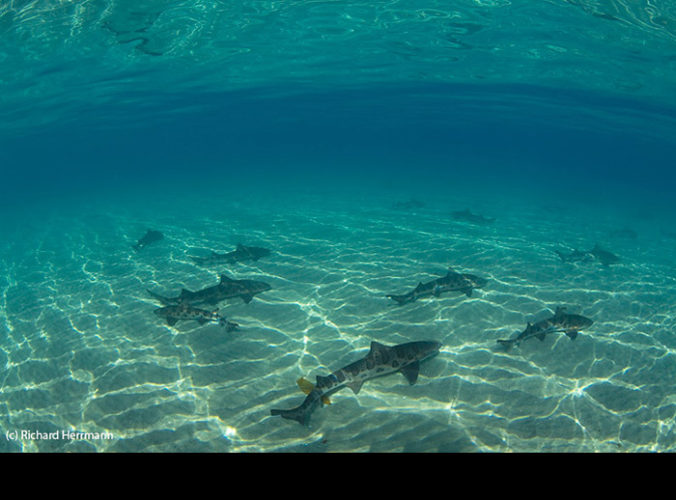 How do you find them? Do you need to go under water?
The most common way is to either kayak or go snorkling off the La Jolla Shores beach and search for them in the shallow, calm waters. But you may not even have to go under water – head to the waters towards the south end of the beach near the Beach & Tennis Club and wade into the shallow waters (make sure you shuffle your feet along the bottom to avoid sting rays). In about three feet of water, you just might find yourself surrounded by schools of sharks!