In the following article, you will find a compilation of animal, mammal and fish die-offs around the world. Keep safe and care about the environment. Follow us: Facebook and Twitter

A third killer whale carcass has been found by wildlife rangers at Fraser Island, off the southern Queensland coast. The whale was discovered late on Friday in a creek north of Kingfisher Bay on the island by Queensland Parks and Wildlife Service staff. The discovery comes two days after two whales, believed to be a mother and calf, died on Wednesday when their pod became stranded on a sandbar in the Great Sandy Strait which separates the island from the mainland.

Hundreds of bluefish are turning up dead off the coast of Long Island – and nobody knows why.

Nancy Michael was walking with a friend to a meeting Monday morning along Kellogg Boulevard in downtown St. Paul when they passed what looked to be mounds of dirt piled beneath two oak saplings. When they looked closer, they were shocked to find that the mounds actually were dead honeybees. “It looked like small snowdrifts,” said Michael. “We went back last night to take pictures, but by then they had swept many of them away.” Some, however, were still hanging in the branches, she said. It wasn’t clear Tuesday what had killed the bees, which may have been a swarm of thousands that had been camping out in the nonflowering trees while searching for a hive box or tree cavity to call home.

The cause of the fish kill at Sugar Lake was not immediately available. 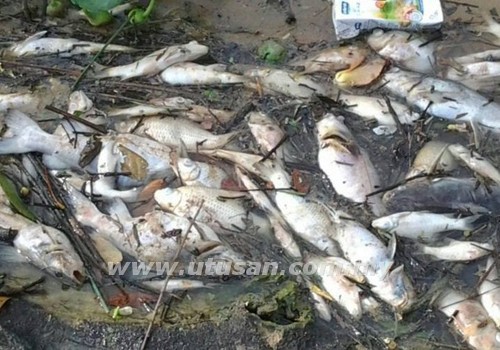 If the google translation is correct, a resident who declined to be named, said people likely poisoned the river. But there are no concrete evidence of that. Nevertheless, people were unable to continue their daily activities because of doubts about the water cleanliness.

Large number of fish and eels wash ashore dead at Daya Bay Beach in Guangdong Province (China) – SINA
Is this mass die-off related to the red tide that arrived just before the now raging typhoon?

Mysterious fish die-off: Is it related to pollution or to the persistent Mwela wind which is blowing over the lake?

Water pollution responsible for the massive fish die-off. But where is the leak?

Malicious, accidental pollution or chemical phenomenon linked to flooding in recent weeks? No hypothesis is at present excluded, depending on the services of the State concerned, awaiting the results of tests made ​​on samples taken.

Hundreds of dead and dying fish on the shoreline at the mouth of the river Simeto, the largest river in Sicily which flows just south of Catania, in an area that should be protected and intact, as it is an “oasis”, a nature reserve managed by the Province of Catania.