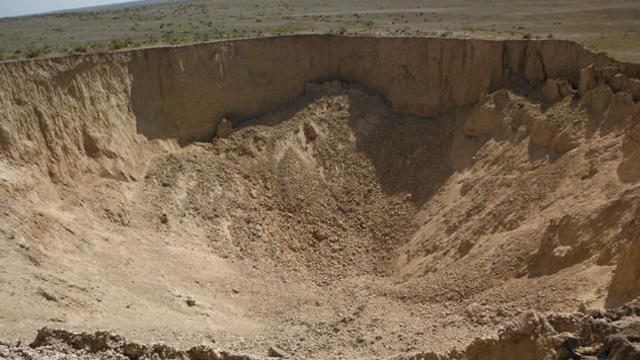 Giant Sinkhole Opens Up in Kansas

A massive sinkhole in a rural pasture in Wallace County is now 90 feet deep, 200 feet wide and growing. Nobody is certain what caused the sinkhole, which was discovered about a week ago. Wallace County is on the Kansas Colorado border and just south of Goodland.

While residents and officials continue to investigate the hole’s source, some in town are convinced that it defies all logical explanation. There’s no oil well around here, there are no irrigation wells anywhere near. This is something that just happened. Is this a God thing? (SOURCE: LIVELEAK)

A sudden sinkhole swallowed part of a Springfield road. City Utilities crews discovered the sinkhole Monday and they say it’s the biggest they’ve seen in Springfield. The crews found the sinkhole as they were installing water mains near Walnut Lawn and Cox. The  sinkhole opened up during a test of the main. (view SOURCE for video)

The incident happened on Cadillac Place, which is four blocks east of North Michigan Avenue, near the intersection of Schust Road. A sinkhole that was nearly four feet wide and 10 feet deep popped open during the eruption. (SOURCE)

View this map to know which parts of the USA are prone to sinkholes.