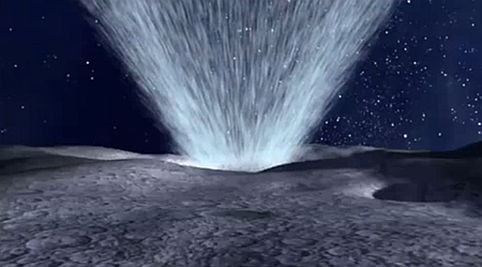 NASA-funded lunar research has yielded evidence of water locked in mineral grains on the surface of the moon from an unknown source deep beneath the surface. Yes as explained in their abstract:

We suggest that the strong and localized hydroxyl absorption features are inconsistent with a surficial origin. Instead, they are consistent with hydroxyl bound to magmatic minerals that were excavated from depth by the impact that formed Bullialdus Crater. Furthermore, estimates of thorium concentration in the central peak using data from the Lunar Prospector orbiter indicate an enhancement in incompatible elements, in contrast to the compositions of water-bearing lunar samples2. We suggest that the hydroxyl-bearing material was excavated from a magmatic source that is distinct from that of samples analysed thus far.

Using data from NASA’s Moon Mineralogy Mapper (M3) instrument aboard the Indian Space Research Organization’s Chandrayaan-1 spacecraft, scientists remotely detected magmatic water, or water that originates from deep within the moon’s interior, on the surface of the moon.

This new water finding is important because it shows that there must be water trapped under the surface of the moon and not just that thin layer caused by solar winds. Now that we have detected water that is likely from the interior of the moon, we can start to compare this water with other characteristics of the lunar surface. This internal magmatic water also provides clues about the moon’s volcanic processes and internal composition, which helps us address questions about how the moon formed, and how magmatic processes changed as it cooled.