This post features a compilation of sinkholes that opened up across the world from the Philippines (results of the 7.2 Earthquake on October 15 2013) and around the USA from Georgia to New York.

Three new, deep sinkholes alarmed some residents in Catigbian town, where the earthquake last October 15 either damaged or destroyed more than 4,000 houses. In the remote barangays of Bagtic, Hagbuaya and Cambailan in Catigbian, residents kept a wary eye on the new sinkholes and large cracks. In Cambailan, the sinkhole was deep enough to swallow fully grown gemelina and coconut trees. The hole, about 40 feet deep, when he went looking for the trees. 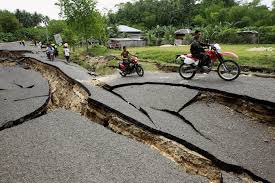 The cracks observed are similar to the cracks found by a team from the Philippine Institute of Volcanology and Seismology (Phivolcs) in the mountain barangay of Anonang, Inabanga. (Source)

Is Georgia becoming a sinkhole state? Well this woman in Dekalb County, Georgia might think it is! A huge sinkhole opened up in her driveway Wednesday as a crew was working on another sinkhole in her back yard. It is probably due to a combination of heavy rains and shoddy materials. Both sinkholes are about 18 feet deep! It could become a nice swimming pool! (Source)

What a bad luck. While walking their pet dog, a in the Shandaken hamlet of Chichester felt in a sinkhole near their property on Route 214. First, the woman felt into the sinkhole. By trying to help her out, his husband slipped in as well. They are not injured! A 15-year-old boy was similarly rescued after more than two hours in waist-deep mud in Westtown. (Source)

The sinkhole, which appeared after the 15th Oct. philippines quake, threatens 16 households in Lapu-Lapu City. According to measurements, the sinkhole is getting bigger and deeper: from 20 by 15 meters and 1.8 meters depth to 40 by 60 meters and 2 meters depth. A huge one! Already eight families have lost their homes when the sinkhole appeared. (Source)