For residents in Oklahoma, thousands of tiny earthquakes in the past five years have mostly been annoying.

But a new study in Geophysical Research Letters suggests the future could be more dire, with fault lines that have been recently reactivated leading to a devastating quake in the state, where many structures were not built to withstand major seismic activity. 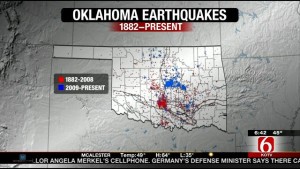 The state, which has seen several hundred seismic events over the past five years, has “a high degree of potential earthquake hazards,” according to the new geological study.

The majority of the recent earthquakes in central Oklahoma define reactivated ancient faults at shallow depths in the crust of less than 3.7 miles (6 km).

These 300 million-year-old subsurface faults that had not been active are suspected to be associated with the recent seismic activity.

Watch this great video about the situation in Oklahoma (even if it takes long to upload!):

The report did not look at whether the reactivation of the faults was linked to the energy extraction technique known as hydraulic fracturing, or fracking.

But hey, we know how these small quakes are created!

From: Oklahoma could be in danger of major earthquakes – NBC News