Did you feel it? Did you hear it rumbling?

Even the USGS is asking around about the cause of these mystery booms reported from the North Carolina coast to Delaware! And could it be linked to the fish kill in Outer Banks, North Carolina?

The U.S. Geological Survey wants to hear from coastal residents about two rumbles that shook houses from the Carolina coast to Delaware Monday, but the federal agency’s instruments detected no earthquakes in the region.

Unlike the occasional booms heard and felt along the Outer Banks from time to time, Mondays rumbles lasted as long 20 seconds. The first occurred at 4:24 p.m. and the second at 6:24 p.m., , according to the U.S. Geological Survey.

The USGS website marks the incident in Nags Head and provides a link asking, Did You Feel It? — Tell Us!

There are plenty of responses coming in… But still nobody has a single clue about this unexplained noise!

Here a video about these strange booms by Enigma Seeker: 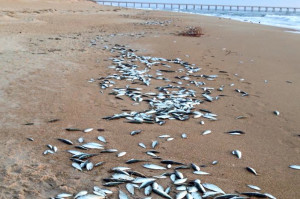 Meanwhile, hundreds of dead menhaden have washed up along the beach from Carova to Avalon Pier, NC causing wide speculation about the cause of the kill, including whether it was related to unexplained rumblings this week. Could it be?

Do you think there exists a link between these mystery booms and this fish mass die-off? Let me know!

Warning! 50 birds fall from the sky on Virginia Campus and near UK reservoir

Is the next epidemic on its way? Are they trying to shut down supply chains? Highly lethal bird flu detected is spreading across the...