But fracking may activate previously unknown faults as determined by geologists from the University of Miami. 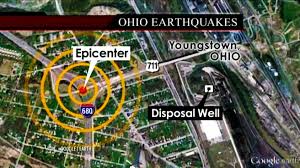 According to a new scientific study, the 77 small earthquake swarm that rattled Youngstown, Ohio between March 4 and March 12, 2014 was triggered by energy companies as a result of fracking on a previously unknown geological fault.

Earthquakes ranged in magnitude from 1.0 to 3.0. The strongest tremor, on March 10, was large enough to be heard and felt by people in Poland Township.

According to the leading researcher:

[quote_box_center]These earthquakes near Poland Township occurred in … a very old layer of rock where there are likely to be many pre-existing faults. This activity did not create a new fault, rather it activated one that we didn’t know about prior to the seismic activity.[/quote_box_center]

Another state not known for earthquakes is Oklahoma. There again temblors are linked to the disposal of the water used in fracking. Injecting wastewater from fracking at underground disposal sites can indeed cause earthquakes of moderate strength by widening cracks in geological formations.

A we just don’t know where all the faults are located, it makes sense to have close cooperation among geologists, energy companies and local governments… as hydraulic fracturing operations expand in areas where there’s the potential for unknown pre-existing faults.