The Max Headroom Incident 1980s TV icon Max Headroom was already sort of creepy, with his plastic-like skin, pixelated appearance, jerky movement, often electronically distorted voice that sporadically changed in pitch and his tendency of glitching and stuttering in front a background of moving geometric patterns.

Yet on November 22, 1987 Headroom became a lot creepier when a TV pirate used his likeness in a series of demon-like, nightmare-inducing transmissions that hijacked US television signals during the 9 o’clock news on WGN and Doctor Who on WTTW. 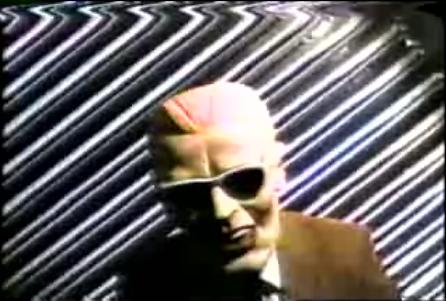 Donning a Max Headroom mask, the hacker’s intrusion during the newscast only lasted for around 25 seconds and was completely silent other than the sound of static.

When he came back 2 hours later to interrupt Doctor Who, he appeared for around 90 seconds with heavily distorted audio.

The video ended with someone, only partially on-screen, spanking him with a fly swatter.

To this day the mystery man in the Max Headroom mask has never been caught or even identified. Creepy!