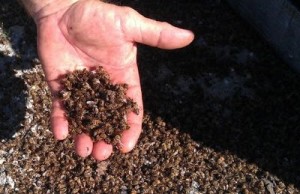 Between April 2014 and April 2015, the number of bee colonies that died reached unexpectedly high levels only ever seen once before.

According to beekeepers, more than 42% were lost. That represents the second-highest annual loss ever recorded.

The largest annual beehive losses occurred in Oklahoma at 63.4% and the lowest in Hawaii at 14%.

Calculations are based on numbers gathered from 6,128 beekeepers in the United States who managed 398,247 colonies as of October 2014 – about 14.5 percent of the estimated 2.74 million managed honey bee colonies in the country.

Winter bee mass die-offs – 18.7 percent – are much lower than summer mass kills – 27.4 percent – which are in turn higher than previous years.

Commercial beekeepers appear to consistently lose greater numbers of colonies over the summer months than over the winter months, whereas the opposite seems true for smaller-scale beekeepers.

Are their bees working too hard? Or are we spraying too much pesticides around?

We should figure it out fast. Without these essential pollinators, our food supply is threatened. We must take action now to protect our bees.

Thank you to Joseph Duval for the information!