5 new volcanoes are currently showing signs of imminent eruptions or erupted in the last few days along the Ring of Fire.

Eruption of Klyuchevskaya volcano in Kamchatka, Russia; Eruption of Santa Maria volcano in Guatemala, Evacuations as swarms of earthquakes hits Mt Kerinci, Indonesia and in-between the Turrialba and the Irazu volcanoes in Costa Rica… The volcanic unrest has not reached its maximum yet!

There is something big going on around the world with eruptions and powerful earthquakes plummeting Earth along the Ring of Fire.

During the week-end, at least 2 volcanoes erupted and 3 others showed increased seismic anomalies leading in one case to mass evacuations of the population living near the volcano.

On April 24, 2016, the largest volcano in Eurasia, the 15,580-feet Klyuchevskaya Sopka in Kamchatka, Russia, erupted sending a column of ash and gas 6 km in the air.

It has been almost continuously active for the past 50 years but the number of tremors and ash eruptions has been on the rise lately.

On April 23, 2016, the Santa Maria volcano erupted in Guatemala covering nearby villages with ash.

According to the special note of Insivumeh, this is the most active eruptive phase of the volcano in the last 2 years.

Since April 22, 2016, authorities are preparing routes and shelters for evacuation as seismic activity of Mount Kerinci volcano in Indonesia as over 10,000 people living on the slope of the volcano are vulnerable to eruption risks. Kerinci is the highest volcano in Indonesia. 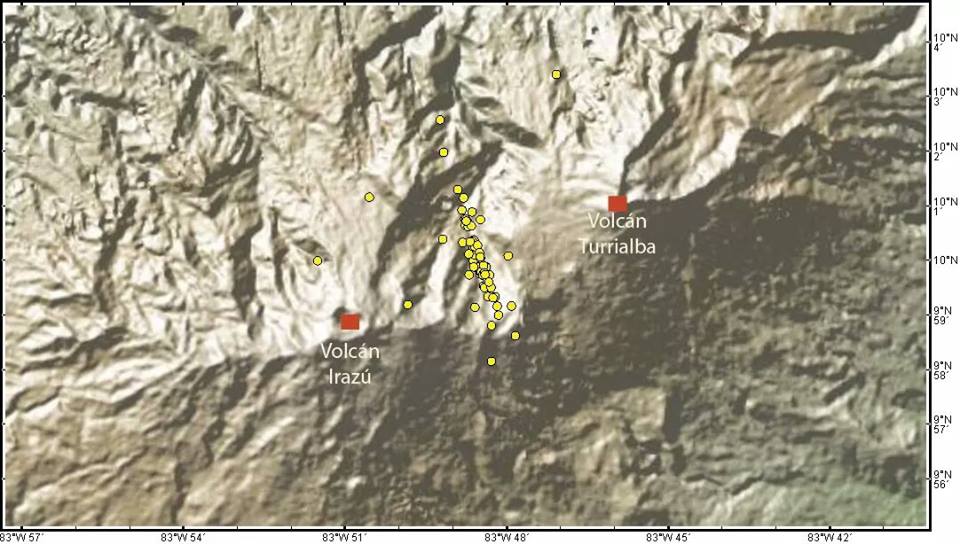 Finally on April 23-24, 2016, a swarm of 73 earthquakes struck in-between the Turrialba Volcano and the Irazu volcano in Costa Rica. Look how this anomalous series of quakes forms a straight line, as if it had occurred along an intersection… Maybe where the two volcanoes meet underground.

Meanwhile, more than 865 aftershocks jolted the prefectures of Kumamoto and Oita after last week’s massive earthquake that hit the Island of Kyushu, Japan.

We have entered a phase of volcanic and seismic unrest and nobody knows when it will end.