Here’s a compilation of the latest fireball sightings around the world.

When will the next one hit Planet Earth?

Weird meteor strikes over UK, France and Wales on October 2, 2016

The American Meteor Society received 28 reports about a fireball seen over England, Normandie and Wales on Sunday, October 2, 2016 at around 18:48 UTC.

And showing the disintegration of the same meteor (space junk?):

A huge meteor exploded over Algeria on October 1, 2016

This first video was recorded from Constantine:

The second video was captured in Ain MELILA region:

Rumours indicate that the space rock touched the ground triggering an impact shock felt by many in nearby cities. via Youtube

A small meteor fell from space and landed in Abu Dhabi after being spotted streaming through the night sky.

The UAE Astronomical Cameras Network (UACN) said the rock – which measured fewer than 3cm and weighed no more than 20 grams – landed in an area of land to the west of Abu Dhabi Airport near Khalifa City on Friday. via 7Days.ae

Panic in Srinagar as falling meteorite confused for missile attack during surgical strikes along the border in Pakistan.

Panic struck the people of Srinagar as a falling meteorite was confused for a missile, hours after India confirmed conducting surgical strikes along the border in Pakistan. via The Indian Express

Light flash and loud boom over Spokane on September 28, 2016 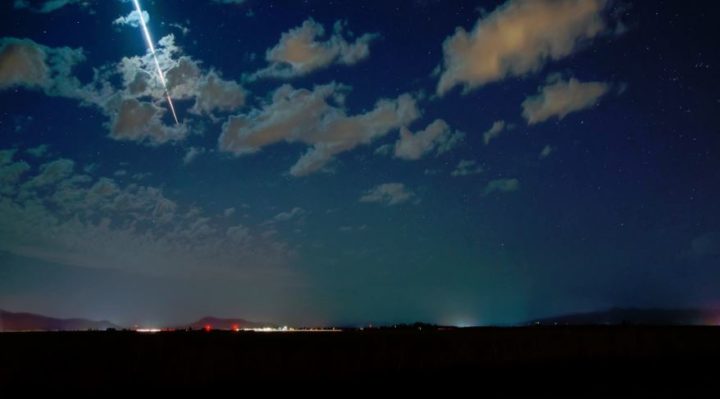 Picture by Tiffany Hansen via My Fox Spokane

Large fireball over Brazil on September 27, 2016

A bright fireball was reported by many skywatchers in Torres, Rio Grande do Sul, Brazil. It was luckily captured by one of the cameras of Bramon – Brazilian Meteor Observation Network. via Youtube.com

The spectacular fireball – a fragment of Comet Encke – entered our atmosphere at 111,000 kmh over the southern half of Spain on September 27, 2016. The space event was witnessed more than 400 kilometers away due to the brilliant intensity of the phenomenon. via Spanish News Today

The American Meteor Society (AMS) has received over 35 reports of a meteor fireball observed over France, Switzerland and Germany on 27th September 2016.

Mysterious ‘fire in the sky’ sightings over Louisiana on September 26, 2016

The problem you run into is that it’s too slow for a meteor and you don’t get multiple pieces of space debris burning up in the same area in the same night. In this case right now, to quote a science fiction story, we have insufficient data for a meaningful answer, says NASA scientists. via WWLTV.com