A massive, two-mile-long, earth fissure in the desert landscape was just charted by the Arizona Geological Survey.

This fissure formed between March 2013 and December 2014. This one is more than half a mile longer than other fissures in the area. The fissure may have grown because of the heavy rains in fall of 2014.

After South Africa, a new massive fissure was discovered in Arizona.

Huge cracks are fairly common in central Arizona, with a cluster of fissures around Eloy, and in Cochise, La Paz, Maricopa, Pima and Pinal Counties.

But the latest discovery, featured above in the video, is more than half a mile longer than other fissures in the area.

The fissure is about 25 miles south of Arizona City, just south of Aries Drive near Sunland Gin Road.

The Arizona Geological Survey says the fissures form after “extensive groundwater withdraw in the Sonoran Desert.

It was the first time the AZGS used a drone to examine a fissure.

Fissures pose a threat to people off-roading and riding ATVs in the area. Roaming livestock can also fall in and get stuck. Standing near the edge of a fissure can be dangerous because it can suddenly cave in. 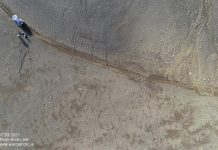 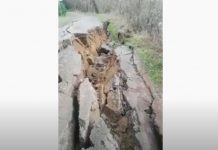