The volcanic unrest spreads across the world from South America, to Europe and Russia.

The eruption of Etna volcano intensifies in Italy; the Sabancaya volcano explodes 42 per day on average during last week on average and moderate to strong explosive activity were reported at Pacaya volcano (Guatemala) and Ebeko volcano (Russia).

The Etna eruption that has started on January 23rd 2017 has gradually intensified since February 27th.

Meanwhile, the lava flood has rapidly reached the base of the cone and flows in the direction of Monte Frumento Supino.

The front of this flow is currently at an altitude of about 2850 m.

The Etna strombolian activity is spewing ash, which is dispersing towards the East flanks. The villages of Zafferana and Linguaglossa have already reported a modest ashfall.

Deformation of the ground associated with the enhanced eruptive activity has not significantly changed yet. 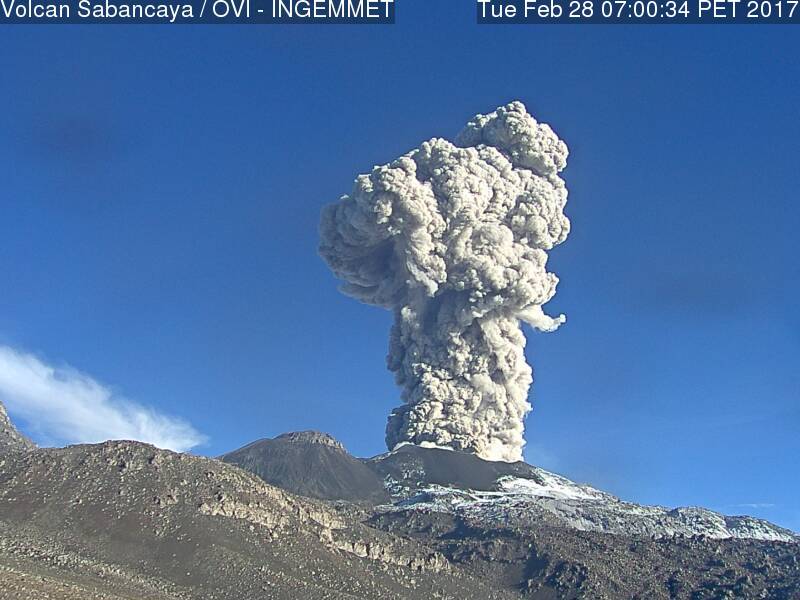 The eruptive columns of gas and ashes reached 4300 meters over the crater and spread more than 40 km to the South and south-west of the volcano and volcanic gas ejection (SO2) reached a maximum of 4070 tonnes / day on February 24, 2017.

The moderate explosive activity of Ebeko volcano continues. The new eruptive phase has started on February 27, 2017, when an ash plume rose up to 2 km a.s.l. and extended about 6 km to the north of the volcano.

A moderate gas-steam with some amount of ash activity of the volcano continues. Ash explosions up to 16,400 ft (5 km) a.s.l. could occur at any time.

Within the last days, the Pacaya volcano showed periods of increased volcanic activity generating a 20 meters wide and 150 meters long lava flow. The length of the flow is however varying.

This activity is the result of the accumulation of matter and the formation of an incandescent cone which generates constant pulses reaching heights of 15 to 30 meters.

This new cycle of lava flow activity is expected to continue in the coming days, generating moderate to severe explosions over 300 meters above the crater.