AT LEAST 200 people have reportedly been killed at Kim Jong-un’s nuclear test site in North Korea after a tunnel collapsed.

The collapse occurred during the construction of a tunnel at the Pukyung nuclear test site in the northeast of North Korea on October 10.

One month ago, I stated that a sixth nuclear test in North Korea would completely destabilize the region thus causing landslides, an imminent collapse of the site and the next big radioactive disaster.

Well it seems it was REAL. According to unnamed sources, MORE than 200 people have died when a tunnel collapsed days after North Korea conducted its sixth and largest underground nuclear test.

The report says 100 people were trapped in a first collapse before another tunnel caved in during the rescue operation, burying at least 100 more. The accident was triggered by the test.

Chinese experts have warned that the underground tests could cause the mountain to collapse and leak radiation into the atmosphere. As shown in the satellite images below taken a few days after, the last nuclear test left landslide scars across the detonation area and beyond:

The images published by 38 North show changes in the surface at Punggye-ri where the ground had been lifted into the air by the tremors.

The blast caused a 6.3-magnitude earthquake. But the tremor isn’t responsible for the collapse. A nuclear underground detonation causes a cavity to form below ground. Since the North Koreans have been using the same site for all of their nuclear tests there are now 5 cavities of ever increasing size and thus THE ENTIRE SITE BECAME GEOLOGICALLY UNSTABLE.

It is very unusual for North Korea to acknowledge any major accident, especially anything that involves its nuclear programme. The report came ahead of US President Donald Trump’s first presidential visit to South Korea next week amid an escalating war of words between him and North Korean leader Kim Jong-Un.

The next radioactive disaster ahead? 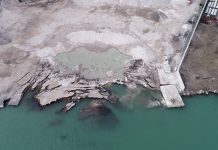 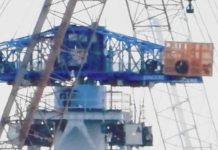 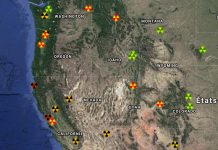