Sand has returned OVERNIGHT to Ashleam Bay on the picturesque Achill Island in County Mayo, Ireland after a twelve year absence. The white sands were washed away during a powerful storm in 2005… And actually reappeared because of the recent freak weather brought by Storm Brian.

This is actually the 2nd time this has happened this year on the very same Achill Island. In May, the sand at Dooagh (westside of the island), that had vanished due to freak storms 33 years ago, reappeared unexpectedly. In the last few days, freak storms again were responsible for bringing the sand back to the beach at Ashleam Bay, this time on the Southern coast of the island. 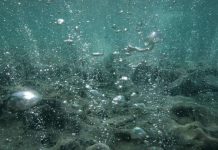