Residents across the mid-Atlantic and New England on Friday were bracing for a major weekend snowstorm as a nor’easter will develop and rapidly strengthen into a bomb cyclone as it moves northward along the Eastern Seaboard.

The storm could unload over 3 feet of snow and up to 90-mph winds as it pounds eastern New England and creates an all-out blizzard in some areas.

“This is going to be a dangerous, life-threatening storm, which will be a blizzard in some spots, especially in southern New England,” AccuWeather Chief Meteorologist Jon Porter said. 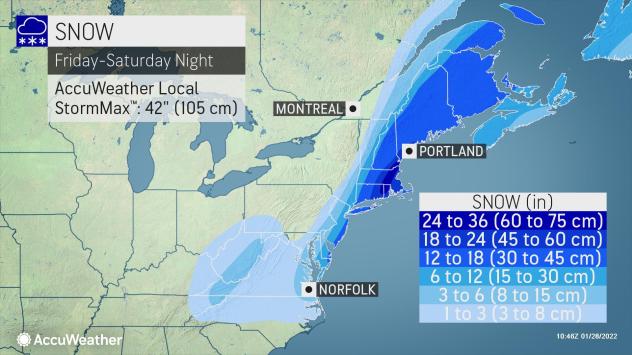 “Bands of heavy snow will develop in eastern New England during the heart of the storm that can produce 2-4 inches of snow per hour – extremely intense snowfall rates,” he added. “There will also be the potential for thunder and lightning associated with these intense bands. Travel is likely to be nearly impossible in parts of southeastern New England on Saturday and Saturday night.”

Boston will be in the heart of the storm, which is expected to unload 18-24 inches in the city. It is not out of the question for the blizzard to climb into the top-five biggest snowstorms to impact Boston, and it could be the biggest to hit Beantown in January. Other locations that will see a similar dumping of snow, with an AccuWeather Local StormMax™ of 42 inches, are Providence, Rhode Island, to Portsmouth, New Hampshire, and Portland, Maine.

Just south and west of this zone from Islip, New York, to Hartford, Connecticut, Worcester, Massachusetts, Manchester, New Hampshire, and Bangor, Maine, 12-18 inches are in store, forecasters say, which is still a tremendous accumulation considering the major blowing and drifting snow that is anticipated during and after the storm. 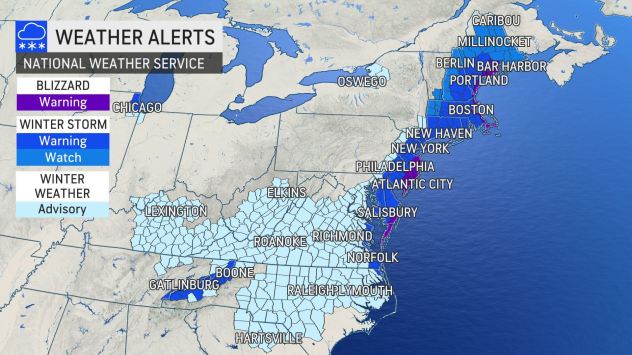 By Friday morning, winter storm warnings had been issued for areas from eastern Maryland to central Maine. A blizzard warning was in effect for parts of the mid-Atlantic from around Atlantic City, New Jersey, southward to the Delaware Beaches and even around Ocean City, Maryland. In coastal Massachusetts, including Boston, as well as coastal New Hampshire, northward to the central Maine coast, blizzard warnings valid for the same time period had also been issued on Friday morning.

Parts of the Southeast and mid-Atlantic will be sideswiped by the big storm. Up to a few inches of snow can fall across portions of eastern North Carolina and southeastern Virginia that were hit by significant snow and ice this past weekend. Blowing and drifting of snow could also occur in the storm’s wake.

Virginia Gov. Glenn Youngkin declared a state of emergency on Thursday ahead of the storm expected to arrive in the area late Friday. “The key message for all Virginians is to stay aware of the weather conditions and to stay off the roads if possible,” Youngkin said, adding that resources have been mobilized, with a focus on coastal areas which are expected to be hit the hardest.

Should the storm strengthen to its maximum potential, hurricane-force winds of 74 mph or greater could be felt in southeastern New England, causing power outages. An AccuWeather Local StormMax™ wind gust of 90 mph is most likely to occur in southeastern Massachusetts. 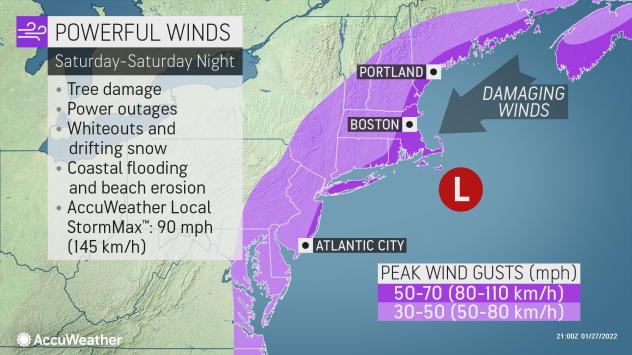 “Roads prone to flooding during nor’easters along the coast in eastern Massachusetts and along the north shore of Long Island are likely to be inundated with significant overwash from this storm,” AccuWeather Senior Meteorologist Brett Anderson said. The combination of the astronomical effects of the new moon this weekend can make the high tides early Saturday morning and Saturday evening most problematic. Minor to moderate coastal flooding is anticipated from New Jersey to eastern New England with a storm surge averaging 2-4 feet.

Farther west over central New England and along the mid-Atlantic coast, the dry, powdery nature of the snow will not adhere to tree limbs. However, winds can still be strong enough to cause sporadic power outages with gusts topping 40 mph at times on Saturday. 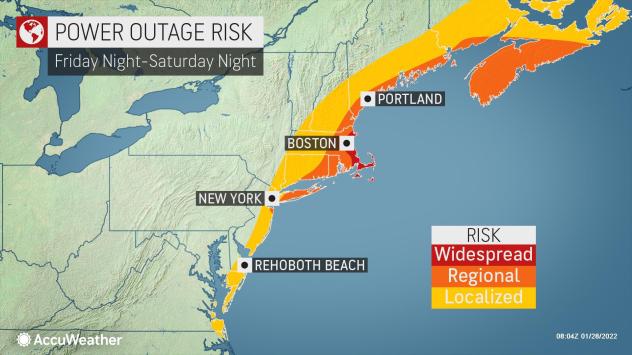 Utility companies in New England are bracing for the storm. Maine Power is preparing by staging crew around the area.

“We’ve brought in 300 additional lineworkers. This compliments our 200 internal lineworkers. And we’re also going to be bringing in some additional tree crews. So, we’ll be mobilizing all of those resources over the next couple of days,” said Central Maine Power VP of Electric Operations, Adam Desrosiers.

The combination of winds frequenting 40 mph or greater along with dry and powdery snow will reduce the visibility to 1/4 of a mile or less for several hours, triggering blizzard conditions in portions of New England.

Measuring the snow in Boston and many other areas in eastern New England, however, may be an exercise in futility for some. Due to the extensive amount of blowing and drifting of snow expected from the blizzard, taking an accurate reading could be extremely difficult. Moreover, travel could become impossible due to significant drifting of snow, which could pile up high enough to completely cover some cars.

New York City may still be buried by a heavy snowfall of 6 to 12 inches. Farther south, accumulations will be lower in Philadelphia, Baltimore and Washington, D.C. The heaviest snow will come down east of those cities as drier air may reduce snow totals in the metro areas. Still, Philadelphia could pick up 3 to 6 inches of snow from the storm. The nation’s capital and Baltimore’s Inner Harbor may pick up a couple of inches. 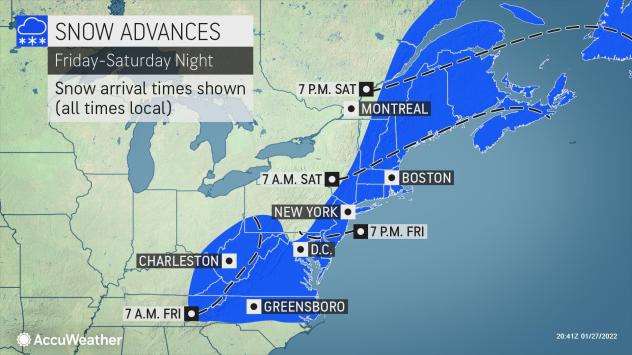 To prepare, the New York City Sanitation Department has 700 salt spreaders in the city loaded up and ready to respond to the storm.

“We’re telling people to stay off the roads, only do essential travel, be very careful, this is another snow where, coupled with the snow coming in, we’re talking about really high winds,” New York City Sanitation Department Commissioner Edward Grayson told AccuWeather National Reporter Emmy Victor.

The intense storm has the potential to shut down airports, such as Boston Logan International Airport, and could lead to scores of flight cancellations in New York City, Philadelphia and Washington, D.C., that can have ripple effects across the nation as crews and aircraft are displaced. [